The Best Things to Do, See and Eat in Insadong

By Mimsie Ladner on Thursday, September 14, 2017
Once the country’s largest market for trading antiques and artwork, Insadong has over the years developed into a bustling yet quaint destination that is now recognized as one of Seoul’s most iconic neighborhoods.

Fairly well preserved and organized to represent Korea’s culture of both the past and the present, Insadong is the premiere locale to sample unique dishes, spend an afternoon in a tea house and wander delightful shops that sell everything from traditional stationary to EXO posters and delicate ceramics to cosmetics. 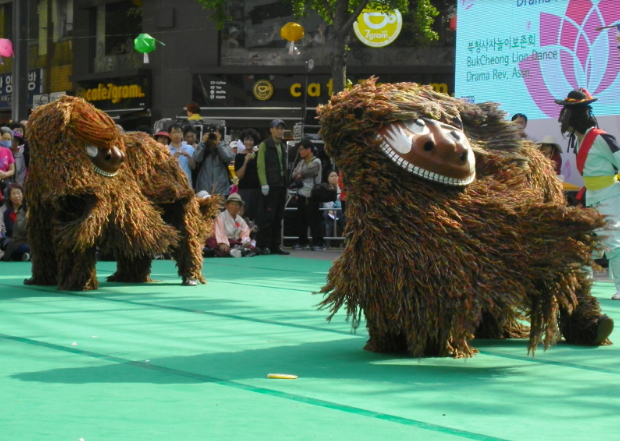 Most tourists only stick to the main strip, Insadong Street, which is quite a shame considering that the narrow side streets that wind through the district are a treasure trove of antique shops, art galleries and tiny cafes waiting to be explored.

One of the best ways to fully experience the real Insadong is to simply lose yourself in the maze of alleys. But for those with limited time, there are still plenty of places to see to get a feel for the area. 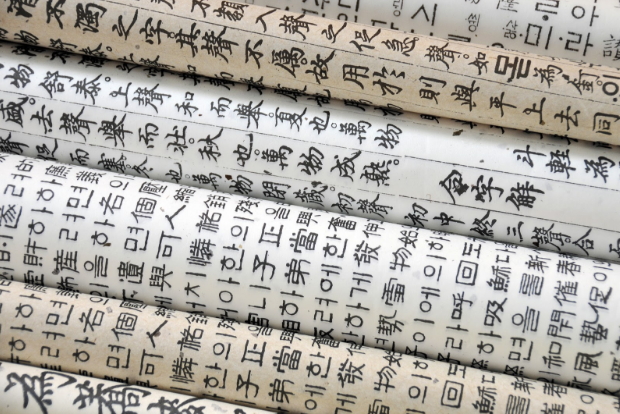 Back to the Good Ol Days

The entrance to the neighborhood, located just outside Anguk Station and a stone’s throw from Gyeongbok Palace, is marked by a giant stone paintbrush, a striking symbol that pays tribute to Insadong’s artistic roots. Here, you can pick up a few additional maps or brochures at the tourist information booth or grab a quick bite to eat at Miss Lee’s Cafe (별다방미스리).

This lively little eatery serves up nostalgia with its signature lunchbox meal of sausage, kimchi pork and a fried egg sprinkled with seaweed over a bed of white rice. Known as a doshirak in Korean, the lunchbox is to be shaken before eaten, just as school children did back in the good ole days. 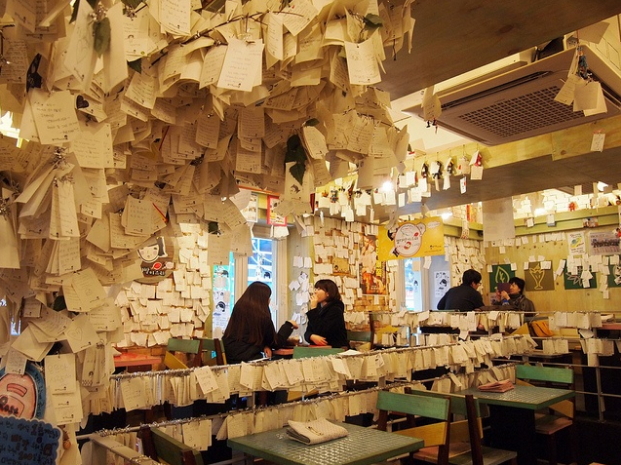 The decor, primarily made up of old-fashioned posters and toys, and thousands of love notes left by previous diners, is especially adorable. As such, Miss Lee’s Cafe provided the perfect backdrop as a filming location for an episode of the popular Korean reality show We Got Married.

Just as kitschy as Miss Lee’s is Toto’s Nostalgia Museum and Giftshop, a fun museum cluttered with Korean toys and trinkets from the 1970s and 80s. Although the collection is a bit chaotic, it’s a great place to check out (with your eyes, not your hands) characters and comics unknown outside Korea, mixed in with a few Japanese and American classics. While most of the items are not for sale, you can purchase vintage Korean candy, stickers, stamps and kiddy toys for prices as cheap as the admission (2,000 won).

Get Your Art On

As the art capital of Seoul, it would be a crime to miss Insadong’s galleries that showcase a wide variety of traditional and contemporary art. Many of the neighborhood’s galleries are completely free to explore so be sure to dedicate at least an hour to browsing a few exhibits. Gana Art Space is one of the better known cultural spaces in the neighborhood and is a breeding ground for up-and-coming artists emerging on the scene. 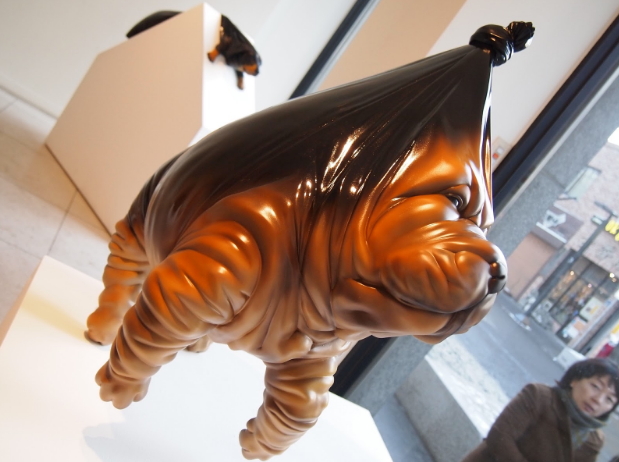 Shop Til Ya Drop

Down the street, Ssamziegil beckons visitors with its imaginative architecture, whimsical shops and rather bizarre cafes and dining establishments. It has become the beating heart of Insadong since it opened its doors in 2004 and is the perfect place to find one-of-a-kind quality gifts. (Unlike most of the made-in-China wares sold on the bordering streets.) 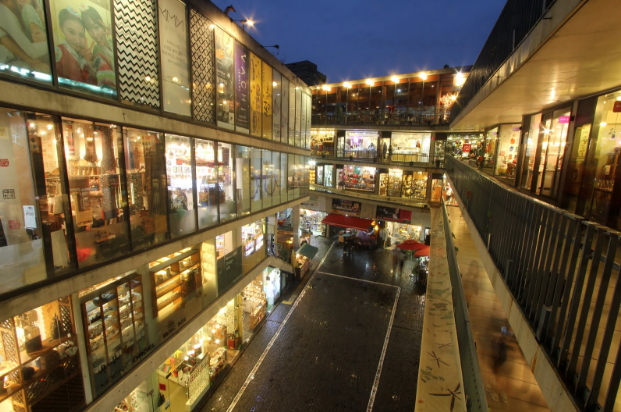 Follow the spiraling walkway upward from the cheerful courtyard to be treated to a fantastic window-shopping experience as you peer into the glass facades of over 70 shops, many of which incorporate Korean themes into their wares, making them perfect souvenirs for all your loved ones at home. Or yourself. Because you deserve it.

For the Hallyu fan, Pattern Craftshop sells orgel, hand-painted music boxes; some play the traditional anthem “Arirang” while still others feature a variety of K-pop hits. Those with traditional tastes might like something from Art Sense, Korea’s only fan shop that exclusively produces and sells fans. The all-natural cosmetics and skin care products that incorporate Korean herbs found at Skylake will excite any beauty junkie.

Upon reaching the rooftop of Ssamziegil, visitors can take in views of the bustling streets below before settling into Ddo-Ong Cafe, sometimes referred to as the “poop cafe.” Here, colorful mini plungers hang delicately from trees, old fashioned squat toilets are placed tastefully throughout the shop and patrons take selfies with borderline offensive poop-shaped dolls.

Yet, the design isn’t too over the top and is worth a visit, if only for a laugh. The ddongbang, or poo-shaped pastries filled with red bean paste, sold outside the cafe also warrant a try.

Also located on the rooftop is a small garden and coffee vendor where couples can purchase love tags and write messages to one another. This also leads into the Alive Museum, a cheesy but fun gallery that engages visitors in a 3D art experience, in which the exhibited works create the illusion that visitors are part of the art. 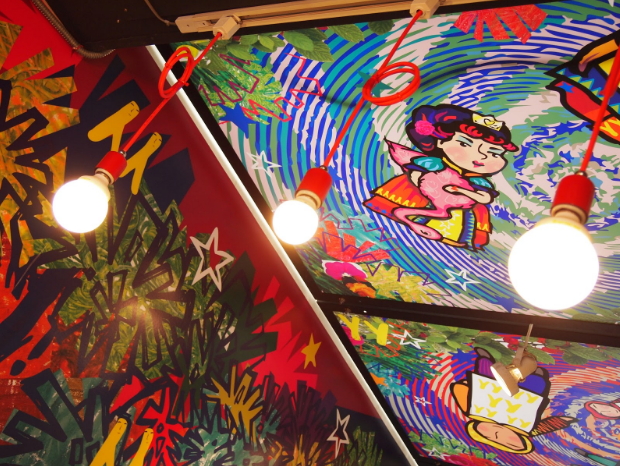 While you’re at it, try on a hanbok and gather around the Chalcak sticker photo booth studio, where you can use props and wigs, hilarious backgrounds and your very best poses to create colorful stickers that you can take home as a memory of your time in Ssamzigil.

Kids will appreciate the paint-your-own ceramics and candle making studio at the experimental workshops in the basement.

A Taste of the North

Get a taste of North Korean style dumplings at Gung, a family-run restaurant owned by an kindred grandmother who escaped the North during the Korean war. The Gaesong mandu, stuffed with ground pork, Chinese cabbage and pumpkin, is served perfectly steamed and packs a lot of flavor into each bite.

The dumplings, which are bigger and rounder than the South Korean version, pair well with the restaurant’s bossam, or tender boiled pork slices in lettuce wraps, and kimchi, which is made fresh in front of the restaurant throughout the week.

Don’t expect the dishes at Gung to be overly inventive or even photogenic, as the restaurant is a simple one that captures the traditional tastes of the past, which is perhaps the best thing about this lovely lunch spot.

Just across from Gung is Kyung-in Museum of Fine Art, a collection of three galleries canopied by trees and surrounded by flowers, a setting that is particularly stunning in spring. The small galleries’ architecture makes use of their surroundings to create a harmony between the indoor spaces and nature. Exhibitions frequently change, but past artworks have included paintings and traditional handicrafts from Korean artists.

The highlight of the artspace is Dawon, the oldest tea house in Seoul, housed in a hanok. In warmer months, it is recommended that you take advantage of the patio, or if you happen to avoid peak hours, the wooden pavilion, to soak up the space’s natural beauty while sipping your tea. 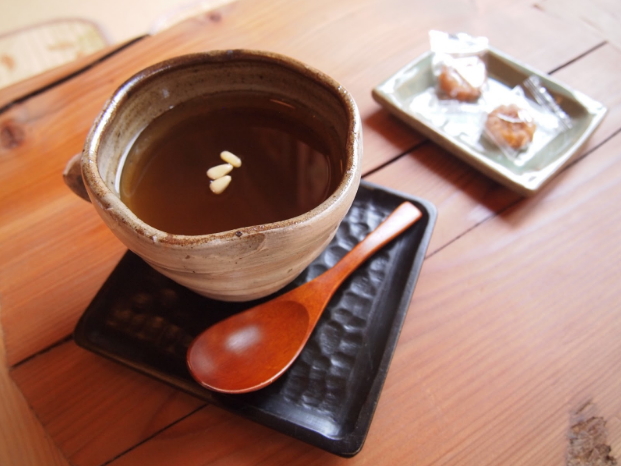 Elusively tucked away on an ivy-consumed alley behind Ssamziegil is Moonbird Thinks Only of the Moon, a lesser known tea house, but one with even more charms. Stepping through the elusive sliding door is almost like stepping back in time to a more simplistic and magical Korea. Shrouded in rustic decor, old household tools and jars of fermenting fruit, one becomes enchanted by the tea house’s charms.

A multi-language menu consists of various homemade fruit and herbal teas, each of which promises a different nutritional benefit. Safe bets include the omija (five-flavored berry) and yuja (Asian citrus) teas, which are served with a complimentary sampling of rice cakes and tea snacks.

After exploring the remainder of Insadong Street, continue on to Jogyesa, one of Seoul’s most frequented Buddhist temples, thanks to its central location. Although it may not possess the solemnity of Korea’s rural mountain temples,

Jogyesa’s larger-than-life bronze Buddha statues, 500-year-old locust and baeksong trees and chanting monks create a spiritual environment. The temple is a must-see during Buddha’s Birthday, when the grounds are decked out in colorful lanterns and performers from all the world over come together to celebrate the Buddha’s life and teachings. 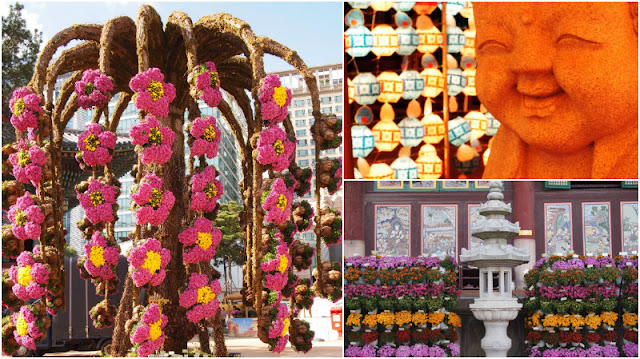 You can even spend a day in the life of a monk through the Temple Stay program, in which participants engage in activities such as chanting, meditation and service. Night owls be warned: wake-up calls during the stay are as early as 3:30am so be prepared. The Information Center across the street from the temple has plenty of pamphlets and books to assist you in finding the right program for you. 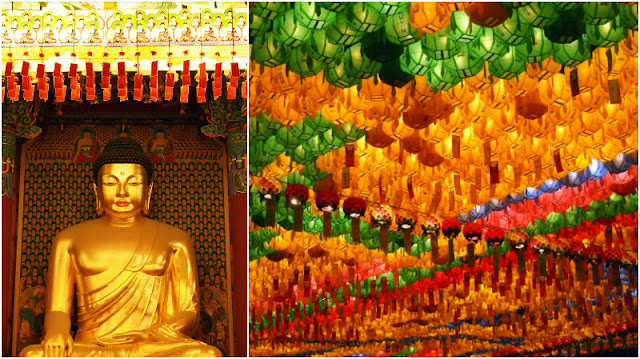 On the fifth floor of the same building is Barugongyang, a modern yet traditional restaurant that serves up customary Korean Buddhist temple cuisine. Strictly vegetarian, this type of cuisine uses only natural flavoring agents such as kelp, mushroom, wild sesame seeds and raw soy bean powder to assist in maintaining nutritional balance while at the same time delivering a simple, clean taste.

Moreover, the food lacks the ingredients usually found in Korean cuisine such as onion, garlic and chili powder; who would’ve thought Korean food could lack this holy trinity of ingredients? 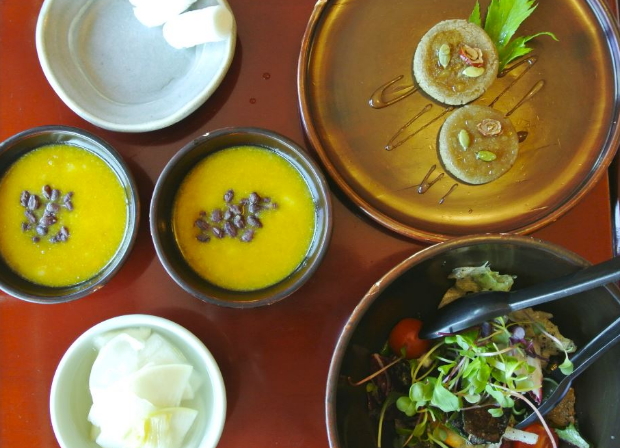 Adorned with minimalist furnishings in natural color schemes and surrounded in floor to ceiling windows which let in plenty of light, Barugongyang exudes a relaxing atmosphere. On the menu is a variety of mid-range to expensive pre-fixed seasonal course meals, each offering up an eclectic sampling of dishes commonly found in formal monastic meals such as dwenjang (bean paste) soup, lotus leaf rice, seasonal salads and fermented vegetables.

For those looking to try temple food on a budget, consider stopping in Barugongyang Kong, a popular lunch buffet, on the second floor.

Although Insadong’s nightlife options are limited — most places shut down around 9pm — there are a few makgeolli (Korean rice wine) pubs that are worth visiting. The best in the neighborhood is Story of the Blue Star, a hidden gem located just a stone’s throw from the subway station.

Adorned by colorful prayer flags, smiling Buddhas and old movie posters (many of which feature the actor-turned-owner’s previous film and theatrical productions), the pub is rustic, unpretentious and popular with rowdy businessmen. Fresh makgeolli is served Korean style, in brass kettles, and pairs well with the kimchi dubu, homemade kimchi and tofu pyramids. 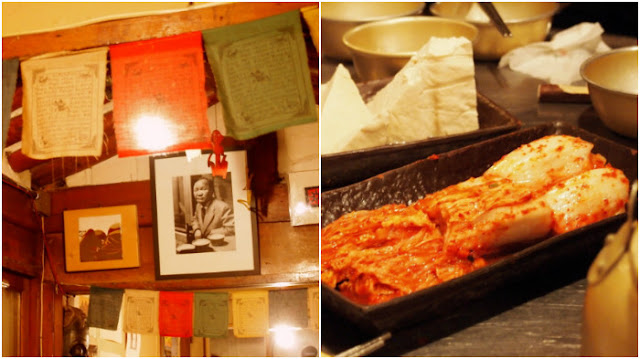 For something a bit less traditional (and less healthy), Brew 3.15 serves up some of the best chimaek in the neighborhood. This dish, which gets its name by combining the words chicken and maekju (beer), has become all the rage throughout Asia in recent years and is a perfect late night meal (or snack).

Start your order with a beer sampler to find the right brew for you; all of the craft beer on tap pairs beautifully with Brew 3.15’s signature fried chicken, which is served up with a variety of homemade dipping sauces. Finish off your meal, and night, with a deep fried chocopie smothered in ice cream. (Yeah, you heard that right!) 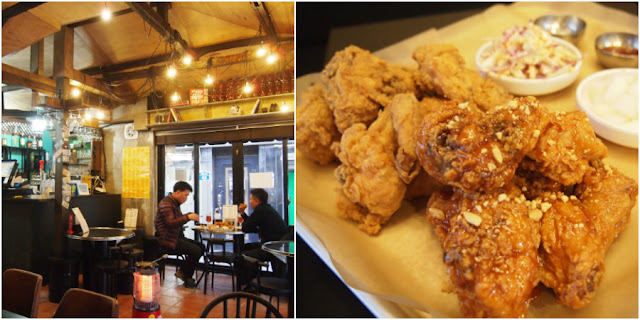 To Get There: Take the Seoul subway to Anguk Station (Line 3, Exit 6). Walk straight for one minute then take a left just before the giant paintbrush status.