Last night, I had the opportunity to see another one of the wonderful non-verbal performances here in Seoul (thanks KTO!). This time around, it was Karma, which is currently showing at the Karma Theater at the Cheongjeongno Station area.

I had actually already seen Karma before but was excited to be able to take along my mom, who I knew would love it. We had seen Miso, another Korean performance with similar themes, just a few days before and I hoped that she wouldn’t get bored or think that the shows were too similar. But, I had forgotten how different they were. While Miso takes spectators back in time to a traditional aristocratic village, Karma transports its viewers to a dreamy fantasy world.

Karma is a story based on the struggle between good and evil with themes of love had, love lost, and love found again. The plot is nice enough but what really makes Karma stand out from the rest is the ethereal atmosphere it creates. The costumes are exquisite, the sets whimsical, and the music hypnotizing. It is all very Cirque du Soleil-ish, but better, as it is intertwined with Korean elements, such as dancing and martial arts. Each act is captivating but one of the most interesting details of Karma is the traditional ink art that appears on large hanging sheets as the plot of the story thickens. Only at the end does the audience learn that the images are actually painted in real-time during the show by a very talented artist. The actors are also great, though I have to admit my favorite was the gold-painted clown that adds comedic relief to each act. 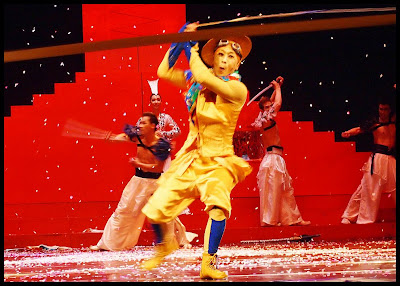 This little guy provided lots of laughs with his acrobatics and goofy facial expressions. 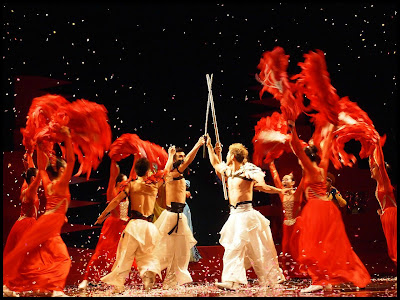 Karma is made up of a lot of fight scenes and incredible martial arts stunts.

Both my mom and I really enjoyed Karma. Although I had seen it before, I enjoyed just as much if not more than the first time, which says a lot about a performance. Karma is a visual treat that is a must-see for all those visiting Seoul. 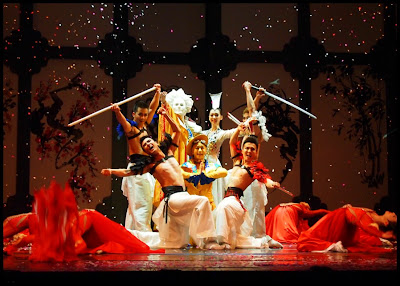 The entire show was fantastic but the final scene was especially breathtaking.

Tickets can be purchased through Interpark but make sure to check out the Visit Korea Year website to download a 20% coupon.