By Mimsie Ladner on Thursday, August 2, 2012
I love living in a city. I’ve even gotten to the point where I don’t think I’d be able to survive not living in a city. I have to admit, however, that sometimes it’s nice to get away from the neon and concrete, if only for a day. One of the great things about Seoul is that there are a variety of places nearby that allow residents and visitors to escape the city and explore the softer side of Korea.

One of the best day trips to take, so long as the weather permits, is to Nami Island. Situated in Chuncheon, 60km east of Seoul, Namiseom is a small oasis of culture and tranquility (when it’s not packed with people).

When my mom was visiting recently, I knew that it would be the perfect place to take her mid-trip to give her a break from the hustle and bustle of Seoul, as well as introduce her to a beautiful area offering a truly unique cultural experience. After making reservations, we hopped on the shuttle bus that took us from Insadong to the ferry terminal in Chuncheon. We purchased our tickets- err “visas” (8,000won/$7.50 for foreigners)- and were welcomed by “immigration officers.” One of the novelties of Nami Island is that it claims to be an independent entity and even uses its own currency, though it’s only for fun and not mandatory. We hopped aboard the ferry and got out first glimpses of the beautiful rolling hills of Gangwon province. A few minutes later, we were arrived and were greeted by the mermaid of Nami statue at the jetty. 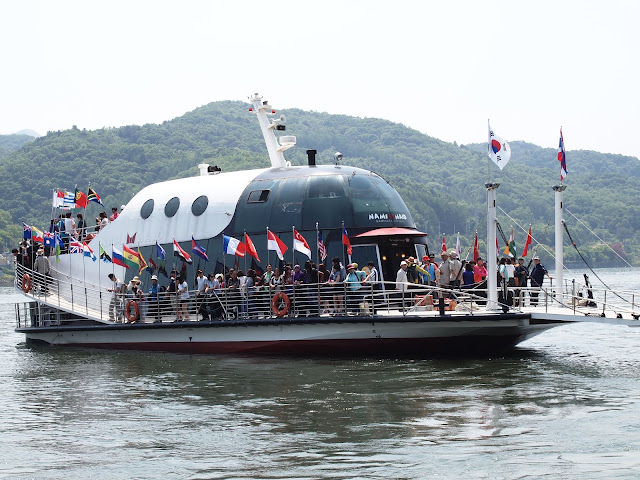 Ferries run regularly from ‘immigration’ to Nami Island. And they are so cool looking, aren’t they? (Photo: Seoul Searching)

Although Nami is walkable, there are a variety of ways to get around the island, with bike carriages, a sky bike rail, and segways being some options. Mom and I hopped the ‘electronic car’ (aka oversized golf cart) to get a look of the island. Flowers were in full bloom, ducks waddled around aimlessly and chestnut and poplar trees offered shade from the summer sun. We watched as folks participated in various water sports and couples meandered down the romantic walking trails made famous by the Korean drama “Winter Sonata.” 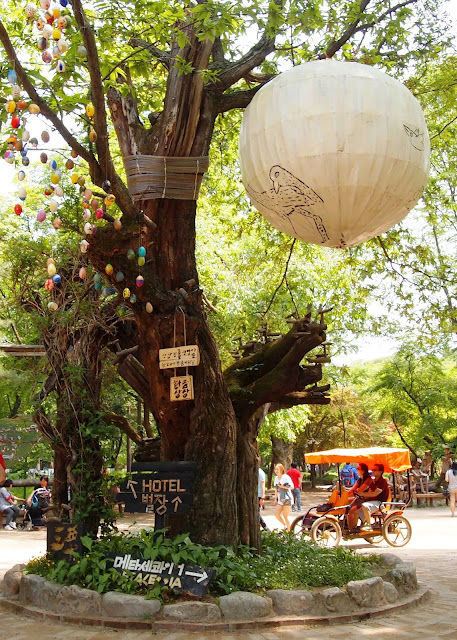 Covered bikes are one way to get around the island comfortably and in style. 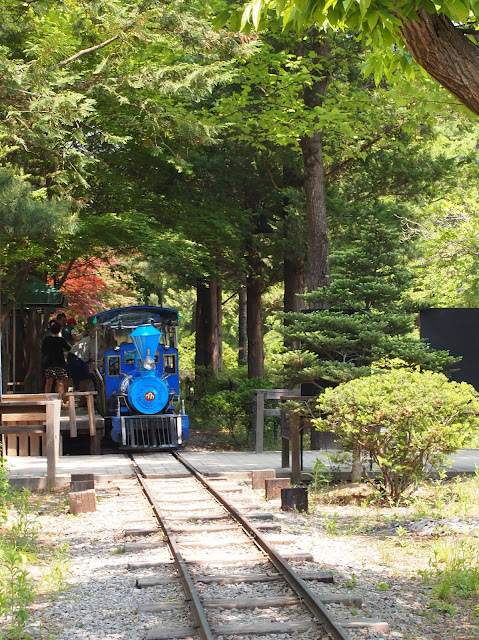 The train is mostly for kids, but it’s still quite picturesque. 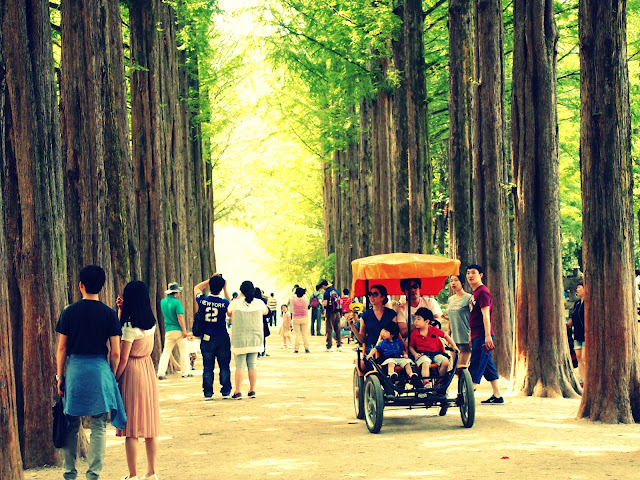 The tree lined walking paths of Nami Island were made famous by the Korean drama “Winter Sonata.” For this reason alone, couples flock to the island to reenact romantic scenes.

When the tour finished, we decided to see the main part of the island on foot. Though a big draw of Nami is its natural beauty, it is also historical and attempts have been made to preserve Korean folk culture in its architecture and monuments. Most of the buildings on the island are constructed in a hanok (traditional Korean home) style and its not uncommon to find cultural relics like traditional rice cookers or carved wooden totems to ward off evil spirits while exploring the island. We even saw a few traditional performances during our visit. 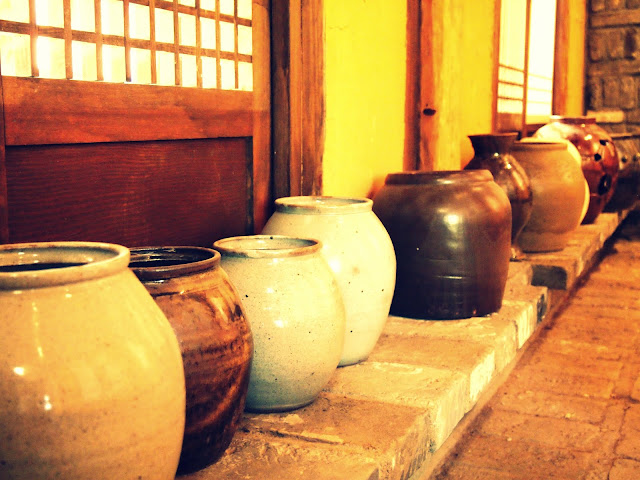 Kimchi pots contribute to the traditional, rustic feel of the island. 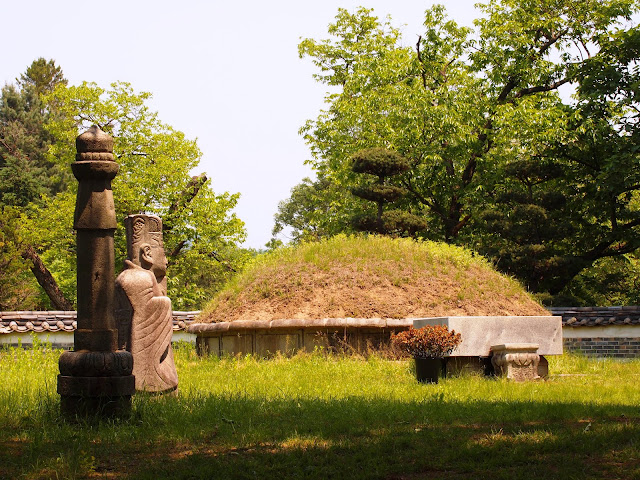 The tomb of General Nami, who the island is named after, can be visited.

Despite its fair share of cultural replicas, Nami Island in no way feels like a tourist trap. It’s also quite modern in that it is home to various museums, art galleries, and handicraft workshops. Artists of all ages come to Nami to produce beautiful pottery and paintings, many of which are on display and contribute to the natural, artsy vibe of the island. A lot of the decor on Namiseom is made from recycled bottles and cans collected from visitors to the island. Considering that most of the sculptures were green, I’m guessing a lot of soju is consumed on Nami. 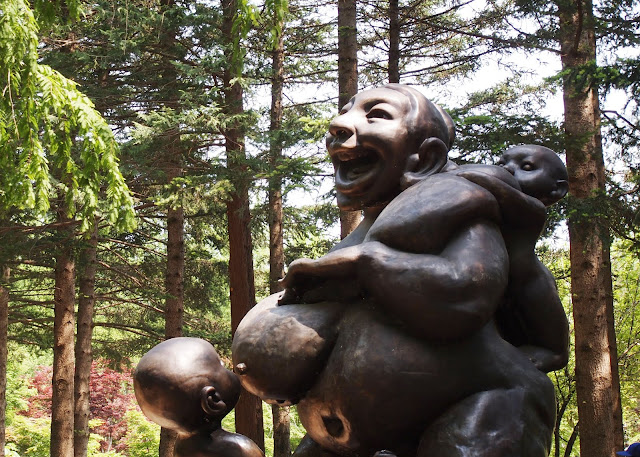 These little ladies are all over the island… couldn’t help but laugh when seeing them.

There are a number of restaurants offering everything from traditional fare to Italian pizzas. Mom and I dined at one of the nicer Korean restaurants and had a delicious meal of ssambap (marinated chicken lettuce wraps) for about 20,000won ($16USD). There are food courts that offer lighter (and cheaper) options and ice cream vendors and coffee shops can be found just about all over Namiseom. 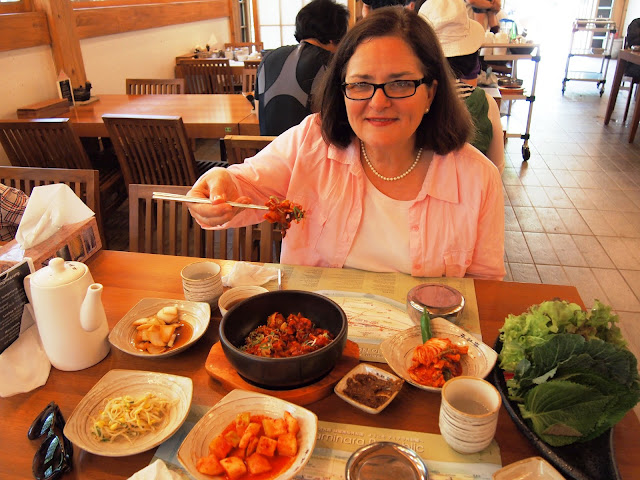 Mom dines on ssambap at a traditional restaurant on Nami Island.

We were enjoying ourselves too much when we realized it was time to catch the shuttle back to Seoul. Mom later told me that Namiseom was one of the highlights of her trip to Korea and I could totally understand why. Nami Island harmoniously combines all the wonderful attributes of Korea- culture, nature, history, music, food, art- and allows them to be experienced at one time in an incredibly breathtaking setting. It’s a great destination for travelers wanting to experience the more natural side of Korea and the perfect day trip for those needing a break from the city.