By Mimsie Ladner on Thursday, June 19, 2014
The penis. As unattractive as it may be, it has remained to be an important symbol of strength, fertility and power in cultures all the world over since the beginning of time.  From ancient Pompeii to Egyptian hieroglyphics to the costumes of modern day tribesmen of New Guinea, phallic imagery has been used unabashedly. Unsurprisingly, the penis has played just as an important role in Korean culture.

One of the more notable legends is that of a young virgin who was left by her fisherman lover on a rock and was swept away to sea in a storm. Villagers believed that a series of unfortunate events (a lack of fish and a poor harvest) was brought on by the girl’s vengeful ghost. To appease her spirit, villagers “erected” a number of wooden penises to keep her content in the afterlife. Their attempt was successful, which eventually led to the construction of Haeshindang Gongwon, or “Penis Park.”

Farther down south on Jeju Island, giant stone statues known as hareubang (“grandfather”) can be found standing tall along the beaches. It’s believed that newlywed women who touch these statues’ long, broad – and extremely phallic- noses will be blessed with fertility.

Yet, there are fewer places to have a unique encounter with Korea’s penis culture than at Deulmusae (들무새), a rustic restaurant tucked away on an obscure country road in Pocheon, about an hour and a half’s drive northeast of Seoul. Despite its obscurity, the restaurant is easily recognizable upon arrival. In fact, it’s impossible to miss the welcoming trail of jaji (“penis”) that line the path to the two story restaurant and cafe. 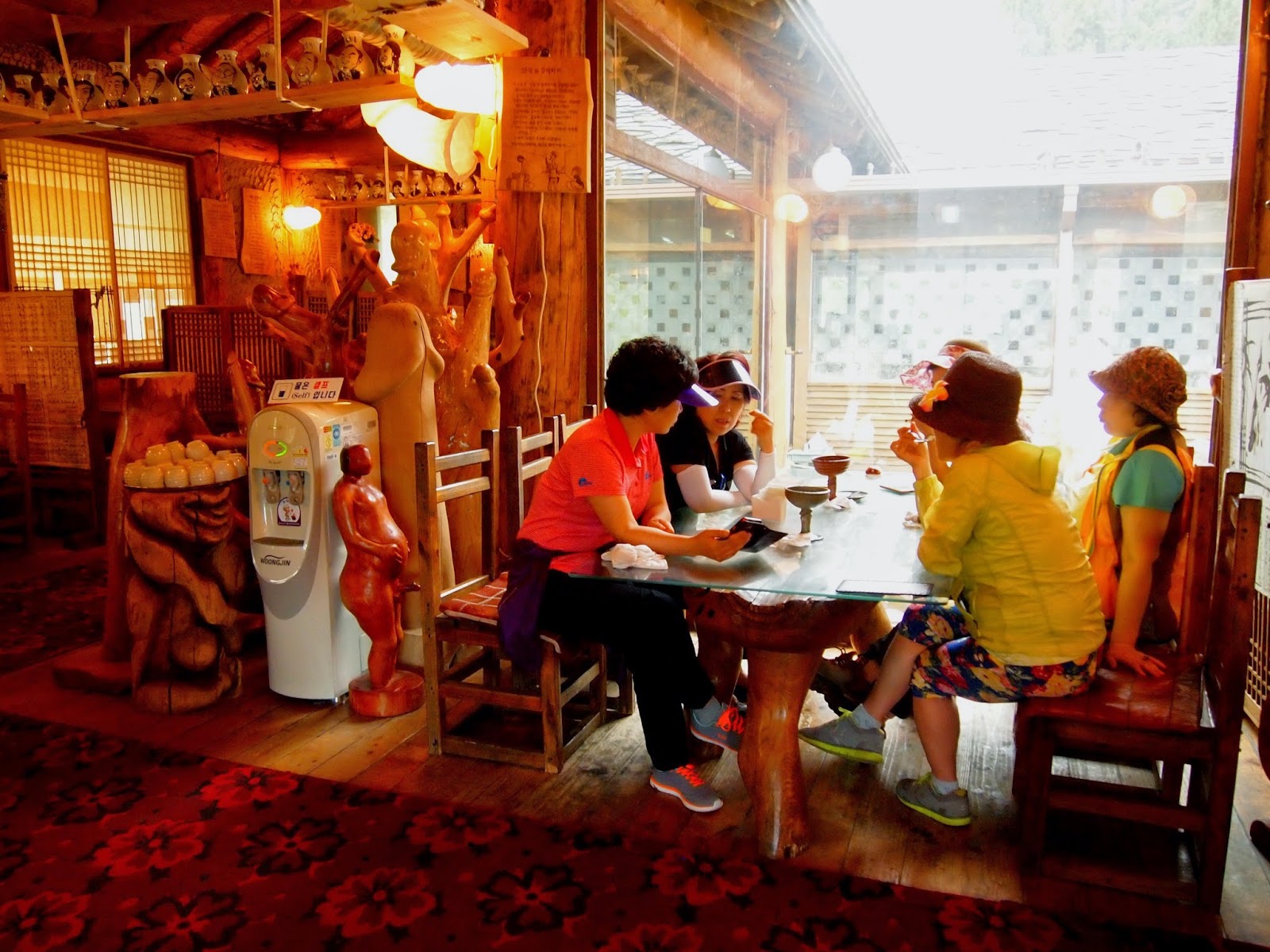 Opened in 1996, Deulmusae wasn’t always a tribute to the male member. In fact, it wasn’t until a Buddhist monk visited one day and noted that the restaurant had too much female/cold energy (what we know as yin). He added that the land’s vaginal appearance only worsened the conditions. After consideration, the owner decided to balance the energy by incorporating phallic imagery into the restaurant’s ceramic ware. Not long after, visitors (mostly of the senior citizen variety) from all over the region began flocking to Deulmusae and soon enough, the place was covered in wood. Literally. 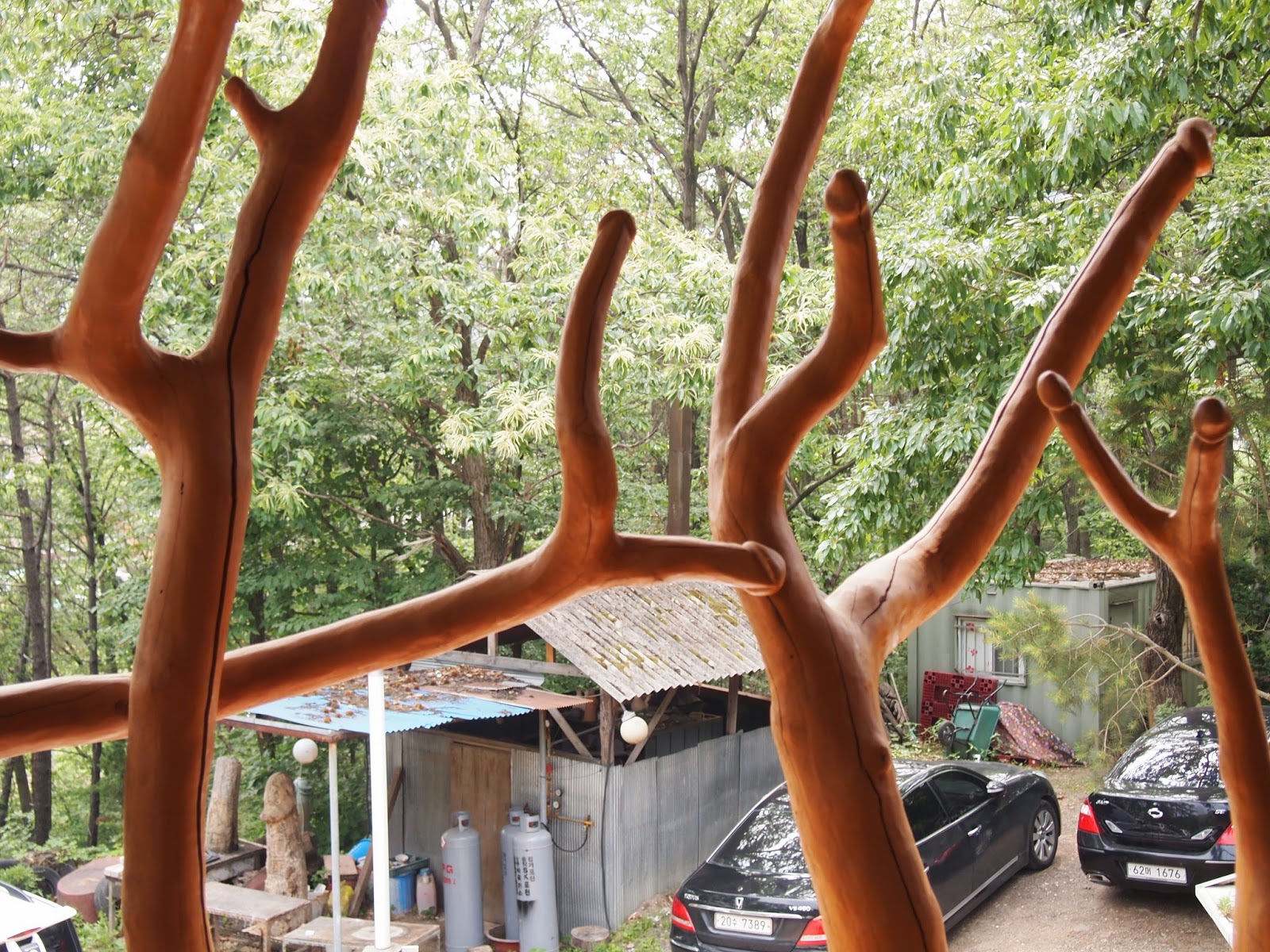 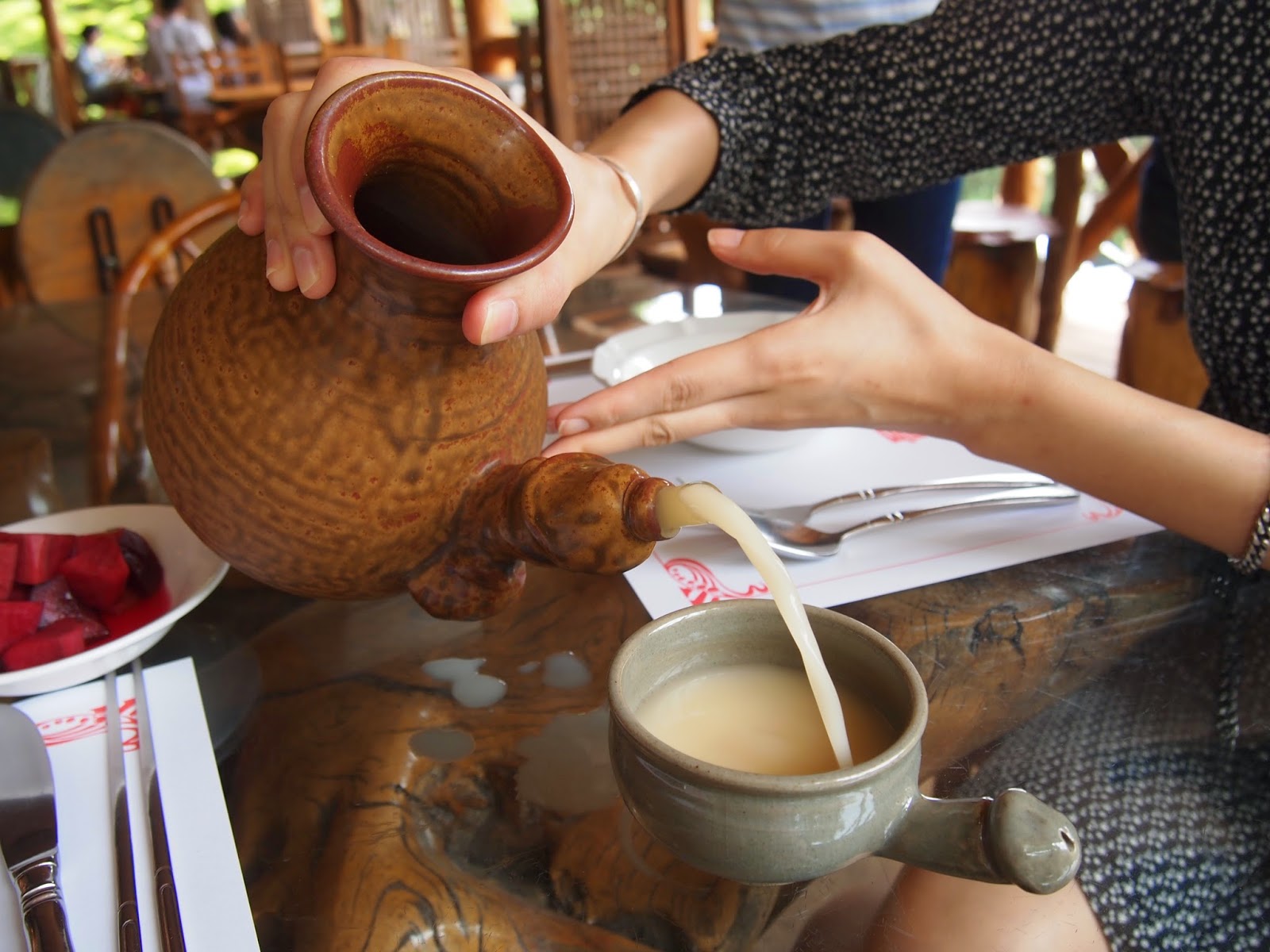 In addition to the ceramics, which are crafted and fired on site, phallic woodwork and sculptures constructed by a local artisan create a natural, if not blush-inducing, atmosphere. The work, as quirky as it may be, is beautifully crafted and is truly art. The only exception is the anatomically awkward fountain of a male who spurts water from his genitals in the courtyard. 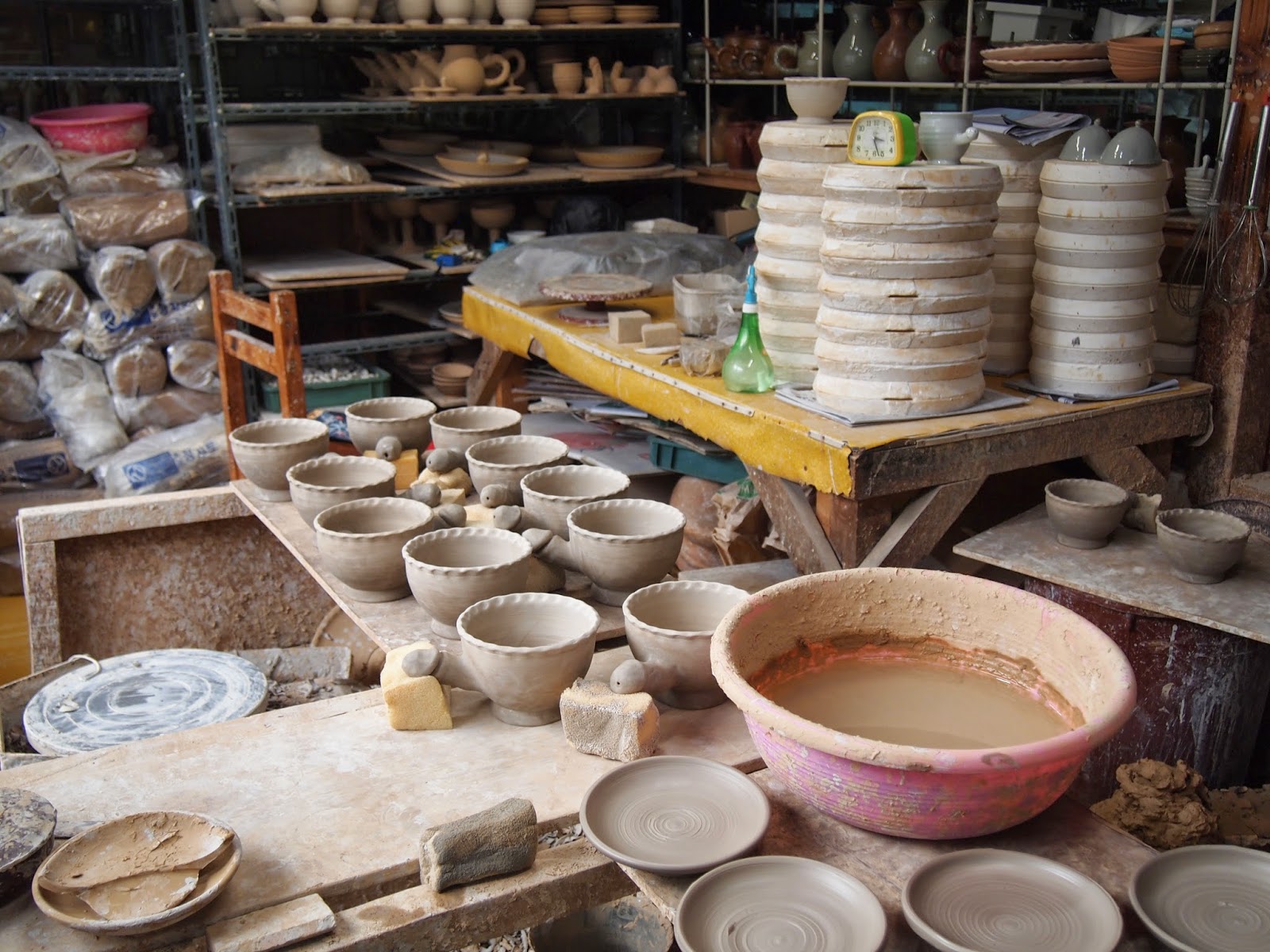 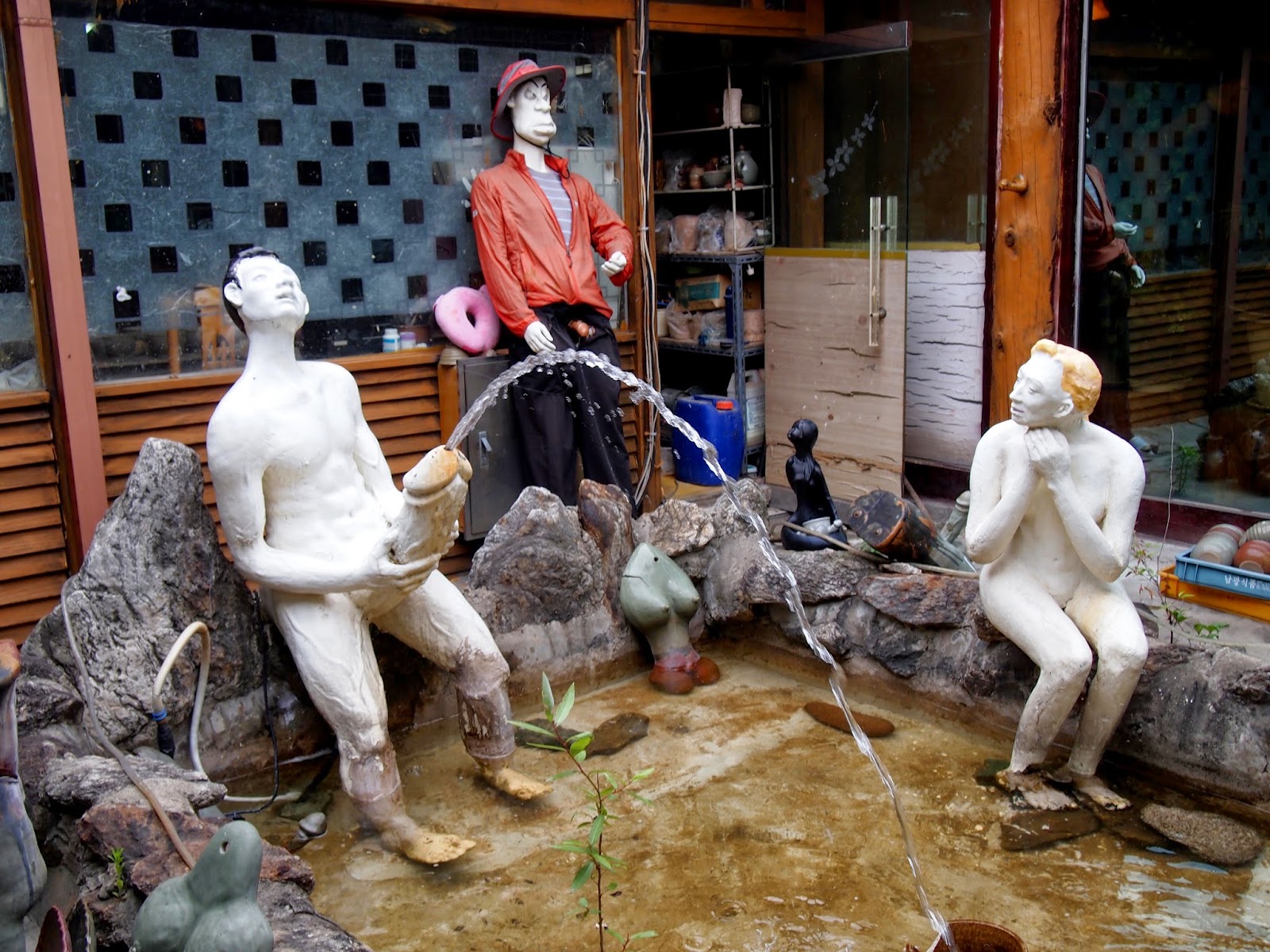 Deulmusae offers a variety of dishes to please all palates, that is, if diners aren’t distracted by the ever-present genitalia. The Deulmusae Course Lunch Set (20,000 won) includes corn soup, and a trio of a fried fish filet, a pork cutlet and a Korean-style hamburger steak. The meal is served with a colorful salad, rice and coffee or tea. The Haemul Pajeon (savory pancake topped with seafood) is good and conceals the plate’s ceramic labia, a real surprise when discovered. 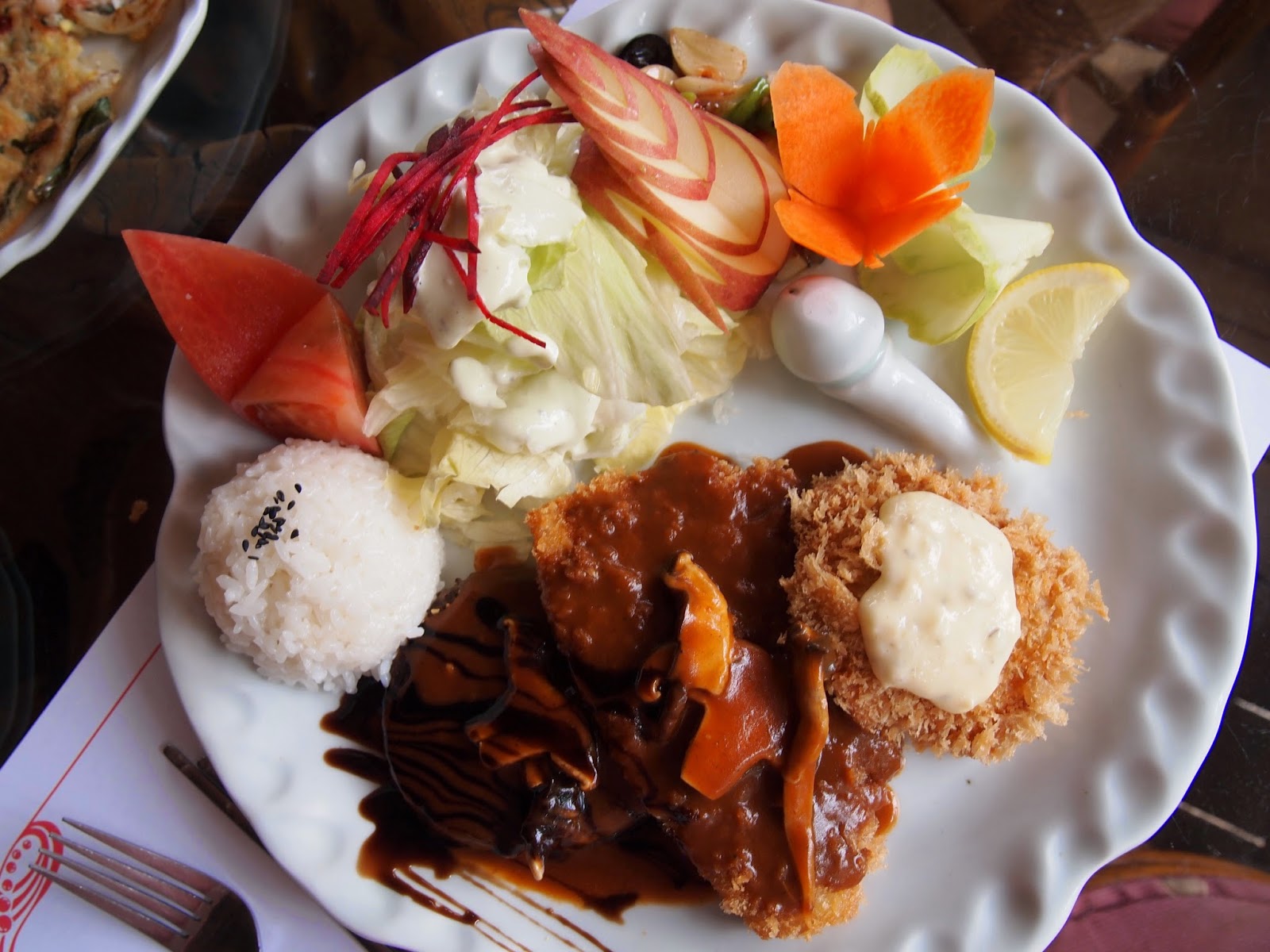 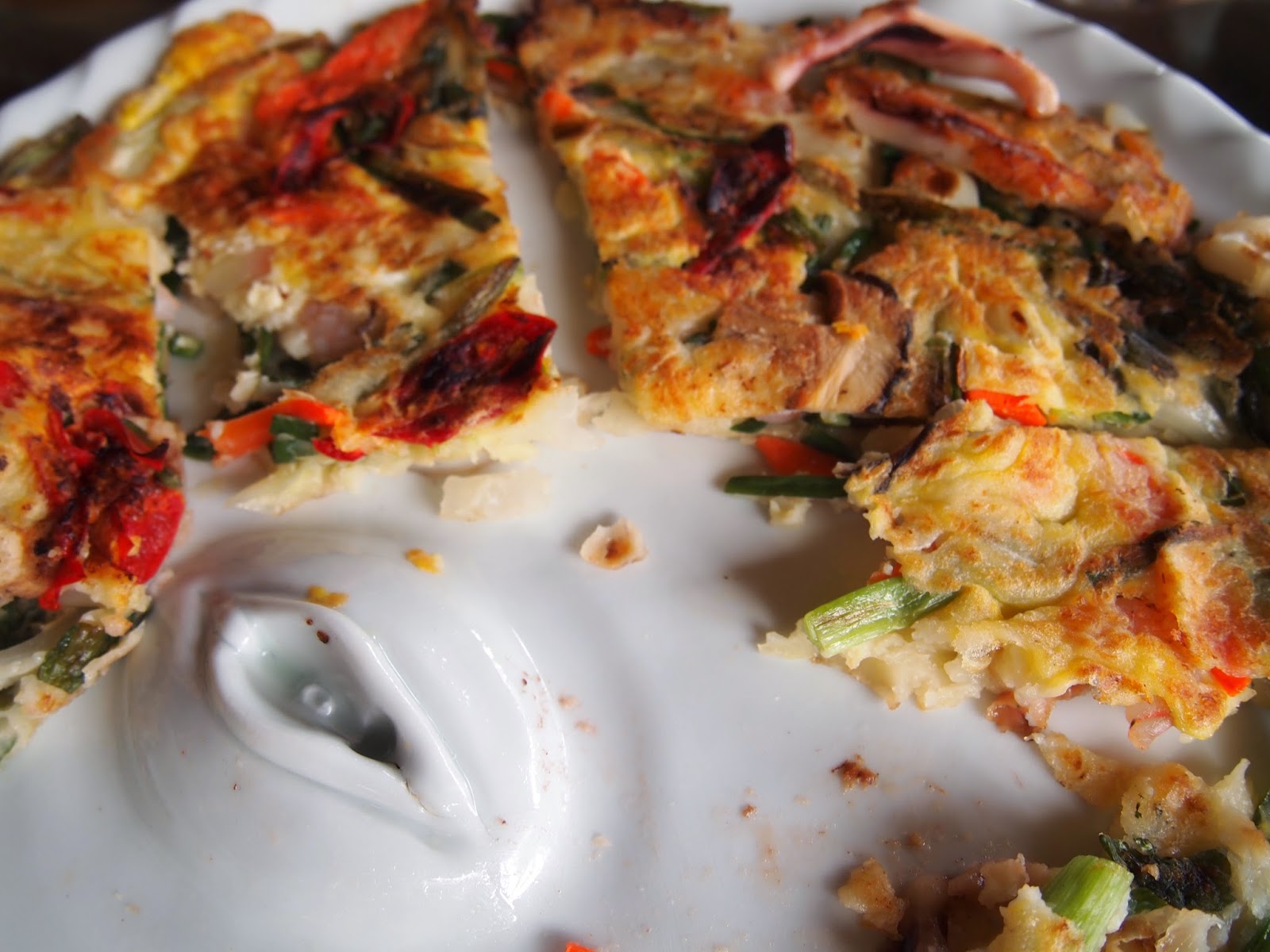 The beverage list is extensive and the patio provides the perfect place to enjoy Deulmusae’s traditional teas and cocktails. The jujube and ssangwa teas are spicy and medicinal but refreshing and the Dutch coffee is an excellent afternoon pick-me-up. Cold drinks are served in cups based on diners’ genders: females are served their beverages in penis cups while males are given vaginae. (Yes, that’s the plural form of vagina… I checked.) Straws are placed strategically to allow for some interesting photo ops with friends or a really- like, REALLY- awkward family dinner. The city of Pocheon is famous for its makgeolli (rice wine) so try the restaurant’s corn variety, which tastes especially good in the fresh, countryside air. 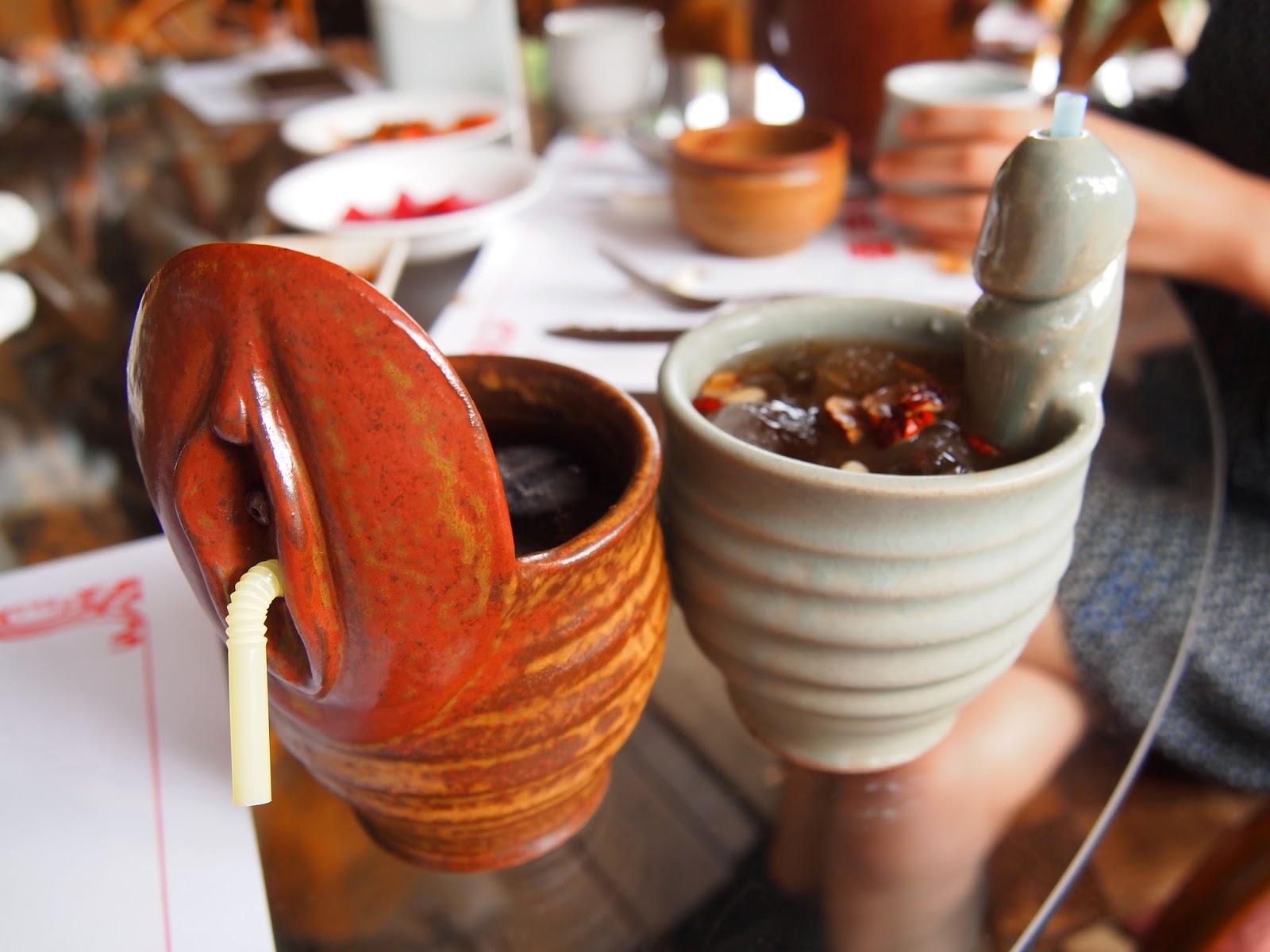 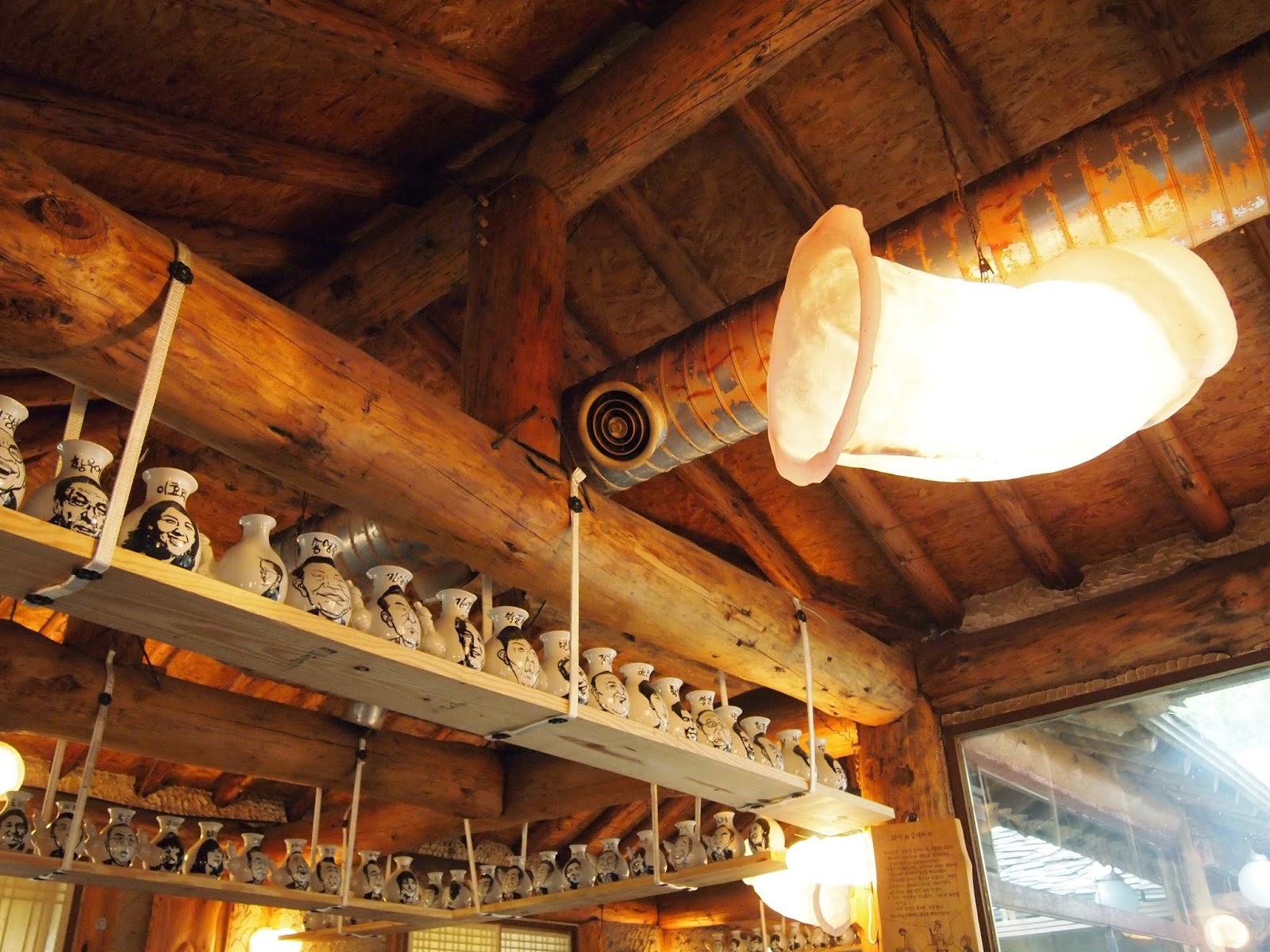 Don’t miss out on your chance to load up on one-of-a-kind souvenirs near the counter. Deulmusae’s famous hand-made phallic ceramic ware can be purchased in the form of tea cups, pitchers and key chains and there’s even flesh-colored, all-natural penis-shaped soap for sale. Despite its realistic appearance, it smells like flowers, fortunately enough. Be sure to check out the world map- made entirely from ceramic willies- before heading home. And don’t be camera shy- the restaurant owners encourage voyeurism.

Pocheon may be a bit out of the way, and certainly isn’t the biggest city in Korea, but is definitely worth a visit to have lunch at Deulmusae. After all, it’s not the size that counts, but the way it’s incorporated into a themed restaurant that really matters. 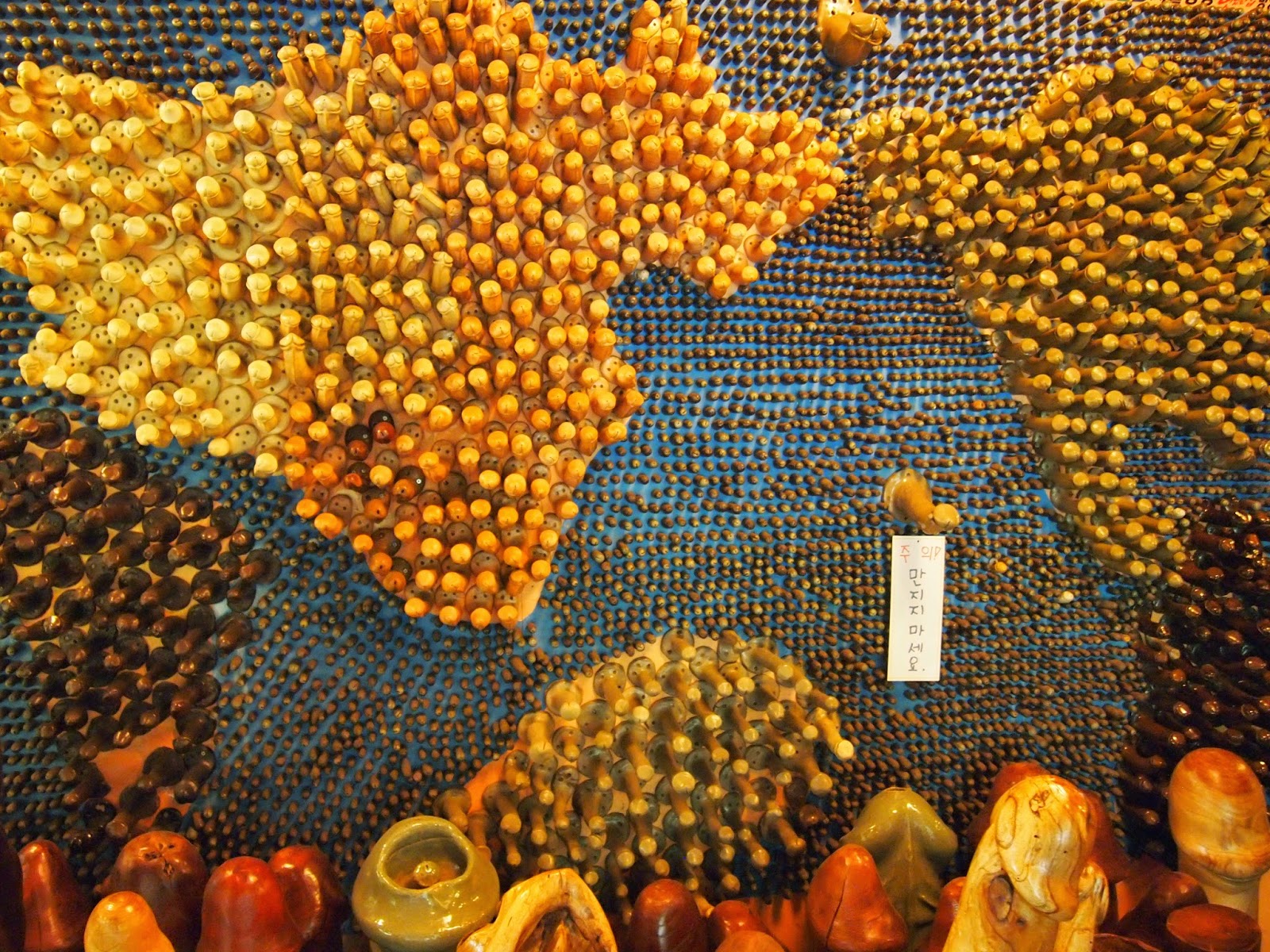