By Mimsie Ladner on Thursday, August 20, 2015
I often get many e-mails requesting recommendations for vegan eats in Korea. While I appreciate vegan food, and have had some fantastic dining experiences at vegan restaurants in the city, I’m most certainly no expert. So, I enlisted the help of someone who is. Amanda from SoKoreazy.com has graciously offered to share her top five vegan (and vegan-friendly) restaurants in Seoul. Without further ado, here they are:

My favorite vegan restaurant in Seoul is not actually a vegan restaurant, though vegan-friendly dishes and drinks feature heavily on their menu. Cafe Sukkara is nestled in a quiet, cozy, and rather nondescript building (noticeable only because of its huge, green wooden door) located between Hongdae and Sinchon. Cafe Sukkara has the perfect cafe atmosphere: dim lighting, low, comfy seats, and a completely open kitchen surrounded by bar stools. In the summertime, they slide the glass doors at the front of the cafe open, and you can enjoy your meal outside on their deck.

The cafe prides itself on using local, mostly organic, ingredients, and the menu changes seasonally. There are usually at least two vegan main dishes on offer, in addition to their always present vegan yeast bread, soup, and salad set. They also offer many vegan desserts, such as carrot cake and raw vegan cheesecake, as well as amazing drinks! I love their seasonal mojitos, made with homemade candied fruit, and their homemade ginger ale is the best I’ve had anywhere, with the perfect balance of sweetness and spiciness. 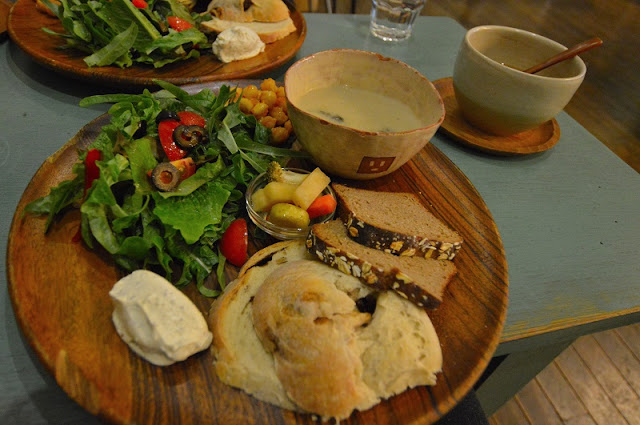 It’s easy to see how much care and attention to detail the staff put into the food, literally, since you can watch your food and drinks being made right in front of your eyes! Their dishes are healthy and quite unique, and I love how frequently they change up the menu. My favorite seasonal dish has been the Lotus Root Patties: melt-in-your-mouth roasted lotus root slices topped with miso gravy and served with pickled carrots, seaweed soup, and brown rice. This is my top pick, for food, drinks, desserts, and atmosphere, they’ve got it all covered.

Before I came to Korea, even before I became vegan, one of my favorite blogs to follow was Alien’s Day Out, run by the multi-talented artist, baker, and bunny-lover, Mipa. She set up her Alien’s Day Out bakeshop from her apartment and used her blog to showcase her art, beautiful baked goods, and reviewed nearly every vegan-friendly cafe, restaurant, and eatery in Seoul. So, I was super ecstatic to hear that she was opening her own cafe in Itaewon the very year I finally moved to Korea! 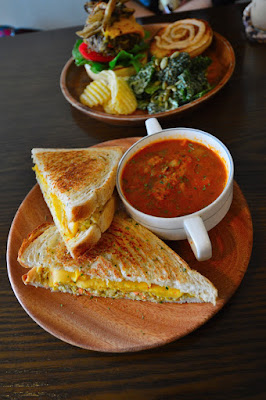 I spent my first year in Korea in Ulsan (where I became vegan, in part because of the overabundance of meat and seafood everywhere), and caught the KTX up to Seoul during holidays and long weekends. PLANT was like a miracle to me then, and it still is, to so many vegans and homesick expats alike.

Mipa’s layer cakes are out of this world: so light, moist, and made in classic American flavor combinations such as chocolate peanut butter and pumpkin gingerbread. For healthier options, check out her scones and fruit-filled muffins. PLANT also serves lunch, such as noodle or rice bowls, wraps, and burgers; the menu changes weekly, and there are usually three different options. And, if you’re a chai-addict like me, you have got to try her soy chai lattes: they are THE BEST. 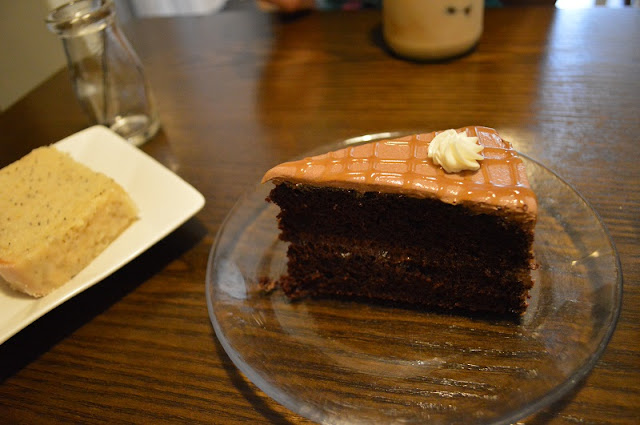 The only downside to PLANT is that it’s located in a very small space, and since it’s SO popular, it can be difficult to get a seat. Luckily, everything is available to take away, and they also sell plenty of pre-packaged goodies such as cookies, powerballs, brownies, and even vegan doggie biscuits! 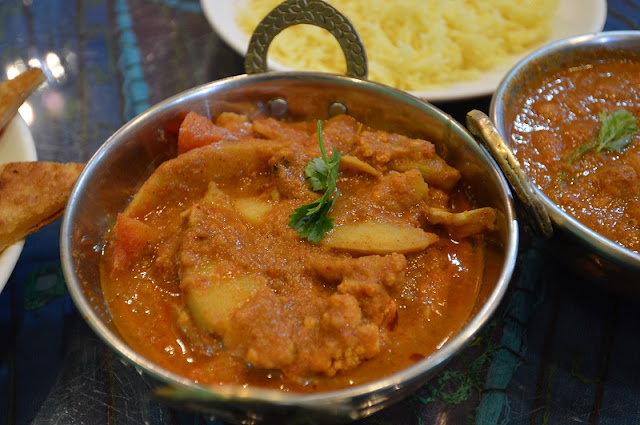 There are a variety of vegetable curries on the menu (my favorite is the chickpea-loaded chana masala), vegetable starters such as pakoras and samosas, and plenty of yummy breads. Before you order, make it clear to your server that you don’t want any butter or cheese in your food, and you’re good to go! Their breads are usually glazed with butter, but if you specify that you don’t want any dairy in your meal, they will cook the bread on a separate pan to avoid contamination.

All of the staff speak English, so don’t worry about any language barriers. Even though it’s located in the kinda run-down backstreets of Dongdaemun, the restaurant’s interior is so bright and decorative, and their spacious booths are super comfy.

If you’re looking for a fancy vegan feast, or if you really want to impress your guests, you have got to check out this temple food restaurant located down a labyrinth of alleys in Insadong. 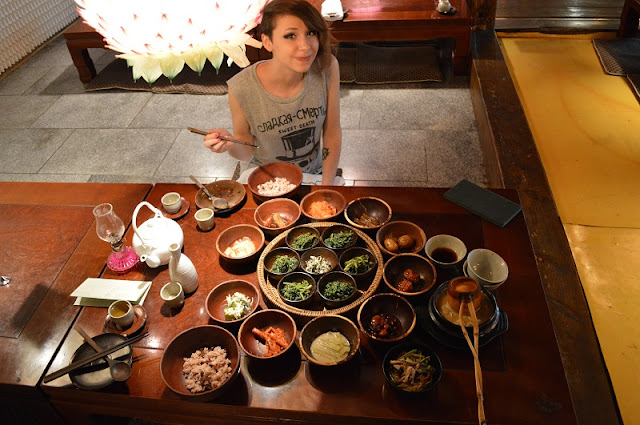 You can choose a lunch or dinner set (priced at 33 thousand won and 45 thousand won, respectively,) but be sure to come here hungry and with plenty of time to spare.

The meals are served in a procession of beautifully-presented courses complimented by fermented pine needle wine and tea. Though the food is inspired by Buddhist temple food, it is seasoned with onions, chilies, and garlic (usually omitted from Buddhist cuisine.) 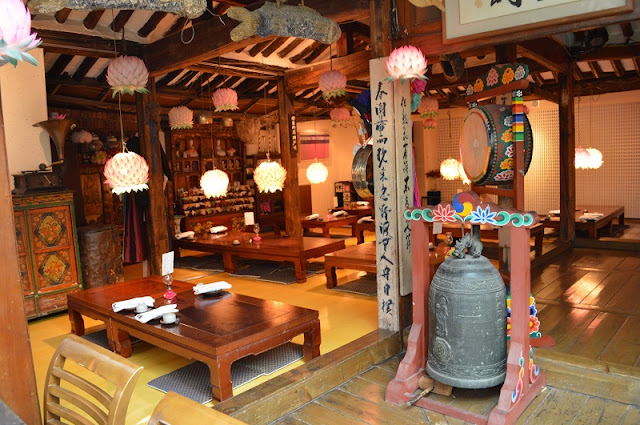 I love bringing visiting friends and family members here because it’s delicious, vegan, and they can get a taste of so many different Korean specialties, ranging from jeon to jjigae to kimchi. Their menu also changes seasonally, so you know they’re using the freshest available ingredients. The interior is just magical, with ornately carved wooden decorations, creaky wooden floors, and lotus lanterns hanging from the ceiling. The restaurant is mostly Korean-style floor seating, but Western-style table and chair seating is also available.

Mimi and Kelly’s is one of the more recent vegan cafes to pop up in Seoul, and I sure do hope it sticks around! If you’re looking to snack on some scrumptious vegan comfort food, this is definitely the place to go! The cafe is located just a short walk away from the touristy streets of Insadong, and shares its space with a Vietnamese restaurant (sadly, non-vegan.) 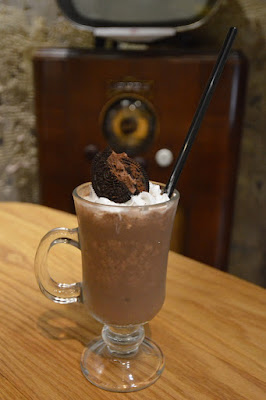 Their drink menu is huge, featuring many specialties such as lassis using vegan yogurt, virgin cocktails, various teas and soy coffees, bubble tea, and amazingly thick and creamy milkshakes. Their food menu is quite small. It’s not really the sort of place you’d go to for a meal, but their snacks are very hearty and really hit the spot.

You can choose comfort food classics such as mac and cheese, coconut cheese toast, and even vegan Korean honey bread (y’know, those big loaves of bread covered in syrup and cream which you can get in all the Korean dessert cafes.) They also usually have a couple of cakes in their display case. And, they have vegan soft serve ice cream! 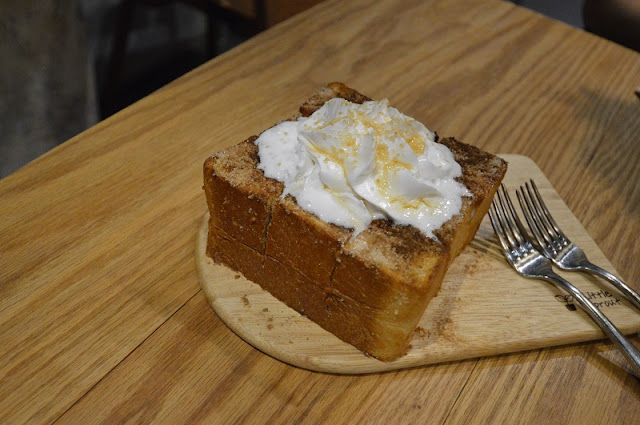 Sometimes they offer special dinners featuring dishes which aren’t available on their menu, such as pizza and pasta. These dinners are open to a certain number of guests, and you can sign up for them via their Facebook page. The cafe itself is quite spacious, with a large communal table and a number of smaller tables. It’s definitely worth checking out if you’re in the mood for something sweet or covered in ooey gooey cruelty-free cheese!

Amanda is an American expat who has spent the majority of her adult life living in the UK, and the past few years in Korea. She became vegan six months after moving to Korea, and hasn’t found the vegan life here anywhere near as difficult as many would expect! She uses her blog, SoKoreazy.com, to review vegan restaurants in Korea and beyond, as well as to write about cute and quirky sights and shopping spots.