By Mimsie Ladner on Thursday, November 2, 2017
Orange may not be the first color that comes to mind when thinking of Korea.  In fact, the more obvious icons that represent the nation exclude orange all together.  It isn’t until one looks beyond the surface that the color’s significance in the country’s culture and history becomes apparent.

Fall is arguably the most beautiful season in Korea. The air is crisp, the streets are blanketed in aromas of roasting chestnuts, and summer greens are replaced by gorgeous autumn hues. Of the colors of fall, shades of orange – tawny, tangerine, mahogany – seem to be most prominent. The season itself is short, but for a few precious weeks, the colorful leaves transform the country into a memorable spectacle for the eyes. 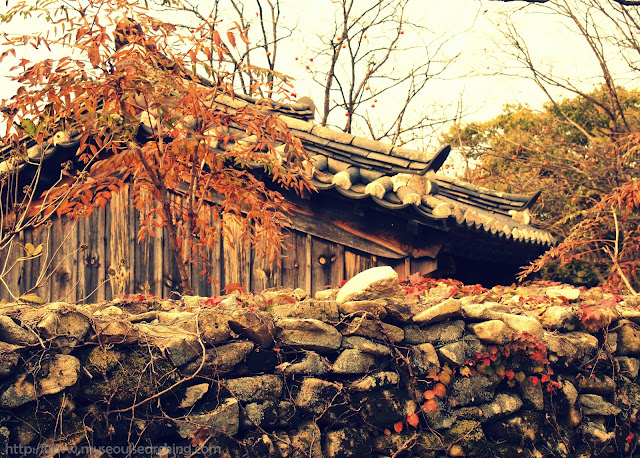 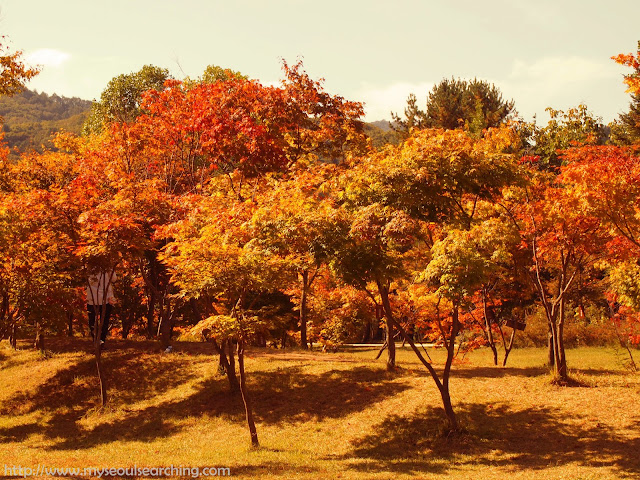 Being naked in public isn’t everyone’s cup of tea. Still, there’s no doubt that the jjimjilbang, or public bath house, is an important institution in Korean culture… not to mention fun and relaxing, if you’re willing to be adventurous and step out of your comfort zone.

While the sex-segregated hot spring tubs might be the main draw, common areas provide a great number of amenities like internet cafes, food courts, and sleeping nooks. Visitors wear provided pajamas in these areas, which are often a rather unflattering, but recognizable shade of sherbert orange. 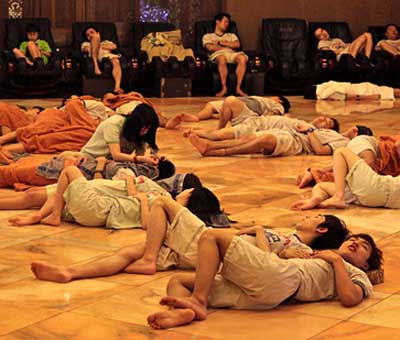 A trip to Korea would not be complete without an evening of barbeque. In addition to offering delicious food, the gogi-jib (bbq restaurant) is the ideal setting for social outings.

Here, slabs of samgyeopsal (pork belly) and galbi (ribs) are served with plates of unlimited banchan (side dishes). Diners then grill the meat over hot coals at their tables. After living here a while, the mere sight of fiery orange charcoal is enough to get my mouth watering. I suppose Pavlov’s Theory doesn’t only apply to dogs. 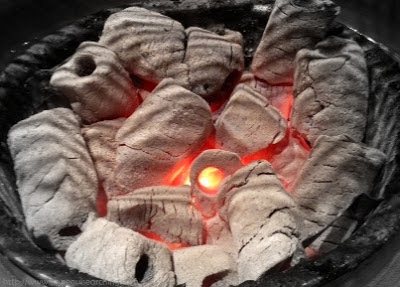 Another symbol of Korean autumn is the persimmon. These tasty fruits add even more color to the fall foliage and bring a welcomed sweetness to the otherwise savory spread of seasonal cuisine. They are particularly tasty when hardened, resembling crispy apples.

In the countryside, it is not uncommon to see the orange fruit hanging in the sun to dry. Dried persimmons can be mixed with ginger and cinnamon to create sujeonggwa, a spicy traditional beverage, perfect cold or hot. 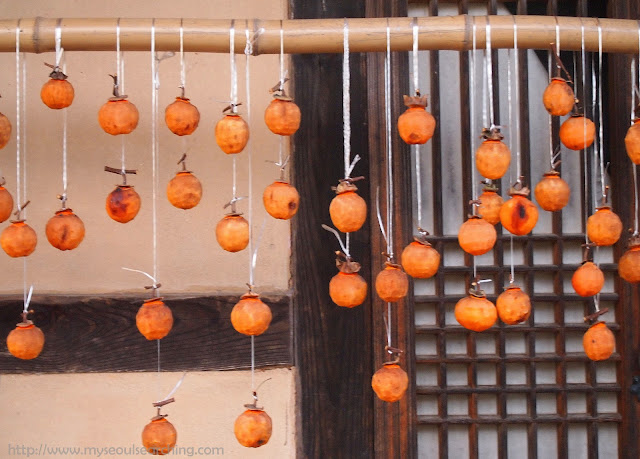 Korea’s answer to fast food comes in the form of a restaurant called Kimbap Cheonguk (literally Kimbap Heaven), though there are variants of the name.

These small restaurants can be found on just about every corner of the country and serve up all the basics of Korean cuisine: mandu (dumplings), ramen noodles, and kimbap (meat and vegetables rolled in seaweed and rice). Even if one cannot read Korean, it’s easy to spot these restaurants (many of which are open 24/7): just look for the bright orange facade. 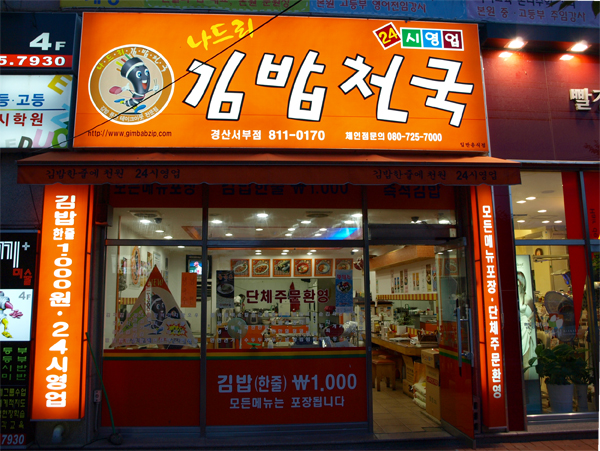 Cultivated on Jeju-do, an island off the southern coast of the mainland, the hallabong is an icon of the region.

The citrus, which is a crossbreed of an orange and a tangerine, is harvested during winter months and is named after Halla Mountain, where it is primarily grown. It is characterized by a lump near its stem and a distinctive sweetness. The beloved Korean fruit is a bit on the expensive side, but is a must-try when visiting Jeju Island. 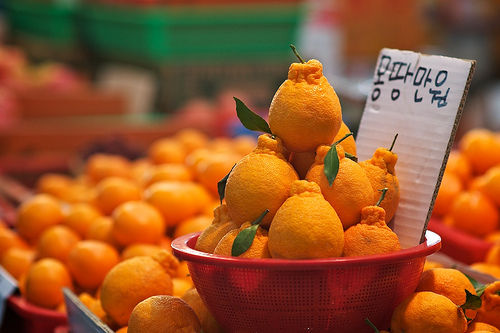 Although Korean tigers have ceased to exist on the peninsula since the early 1900s due to hunting and habitat loss, the animal remains to be a national icon of the country.

From the nation’s creation story to folk tales to ancient religious paintings, the tiger can be found in a number of forms: fierce, powerful, protective, courageous, humble, or even sacred. During the Joseon dynasty, the head of a tiger was often used in rituals that were held to bring about rain. These days, however, rather than worthy-of-sacrifice, the animal is often depicted as fuzzy and cute. (See: Hodori, the official mascot of the 1988 Summer Olympic Games in Seoul.) But then again, what isn’t in Korea? 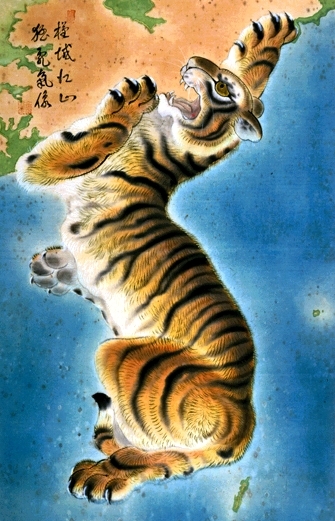 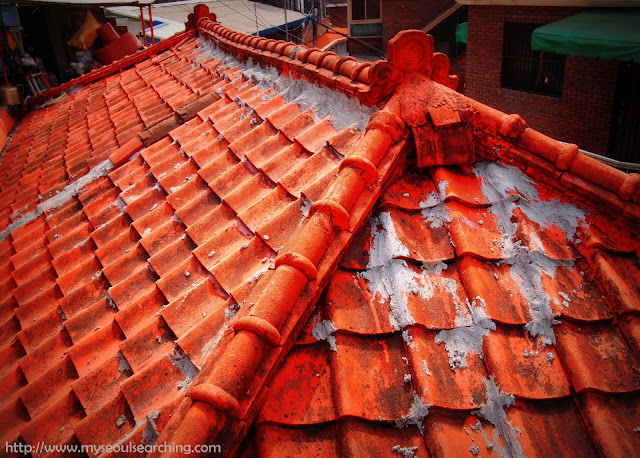 When traveling through the Korean countryside, it’s common to spot houses with orange tiled roofs. 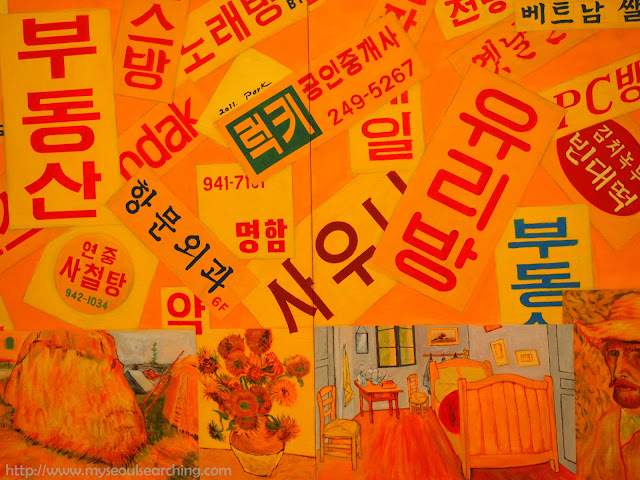 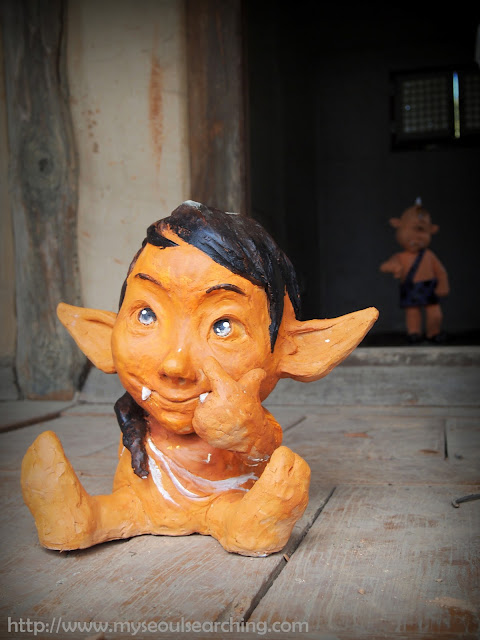 An orange tokaebi, or goblin, guards a traditional house at the Asan Folk Village. According to Korean legend, these creatures often hide on rooftops and are real tricksters. 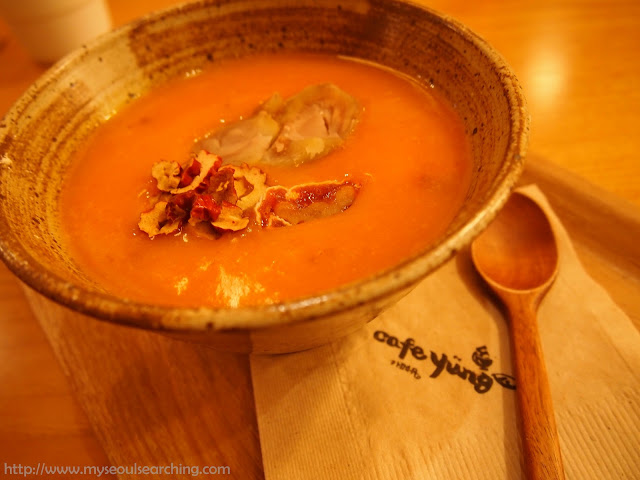 Hobak juk (pumpkin porridge) is a tasty, sweet Korean dish that is popular during the winter. 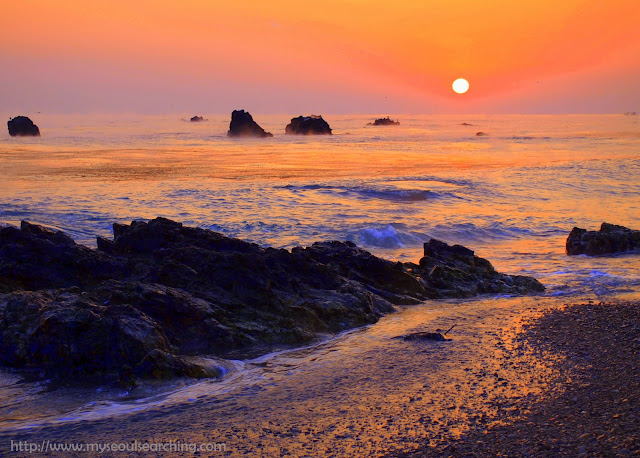 On New Year’s Day, families and loved ones gather on Korea’s beaches and mountains to witness the first sunrise of the year.  This one was photographed on Kampo Beach near Gyeongju.
South Korea is a lively, picturesque country, represented by a myriad of shades and hues from kimchi-reds to snow-covered-mountain-whites. Still, it’s impossible to ignore that the color orange contributes greatly to the nation’s beauty, even if its significance is not so apparent on first glance.  Whether at the jjimjilbang, on the peaks of Seoraksan on an autumn day, or even at the zoo, it’s easy to appreciate the allure and meaning the shades of orange bring to the Korean peninsula.
To see the other Colors of Korea, visit…
Red at Lost in the ROK
Pink at Head High Heart Strong
Yellow at Seoul State of Mind
Green at JohanneMiller.com
Blue at Kimchibytes
Purple at Mapping Words
White at Evangeline Story
Words by Mimsie Ladner of Seoul Searching. Content may not be reproduced unless authorized.
11
Previous Post
Next Post

Gross or Great? 8 of Korea’s Most Bizarre Foods