It’s no secret that Koreans are some of the hardest workers in the world. From a young age, one spends his or her school days buried in books, memorizing endless pages of material while hopping from math academy to English lessons to study hall. There’s very little time for play, or childhood, for that matter.

Things don’t change much by the time one reaches the workplace. Of the cities across the globe, those working in Seoul put in the most working hours per week on average. Efficiency has nothing to do with it, but because of their propensity to work hard, Koreans often find it necessary to play hard, too. And very few can play as hard as the Koreans do.

When visiting South Korea, it becomes obvious fairly quickly that nightlife here is a big deal. Drinking and going out is as much of an integral part of Korean culture as kimchi. As in many places, university students and twenty-somethings flock to nightlife districts like Hongdae, Gangnam and Itaewon to escape the imminent pressures of life and to get buzzed on cheap drinks and celebrate their youth.

For the career man (or woman), going out is a way to maintain social connections and is often unavoidable and obligatory in many workplaces. But, unlike in the West, evenings of binge drinking occur just about every night of the week and rather than throwing back a few brews in one particular restaurant or bar, Koreans party in cha, or rounds, moving, drinking and eating in various establishments. 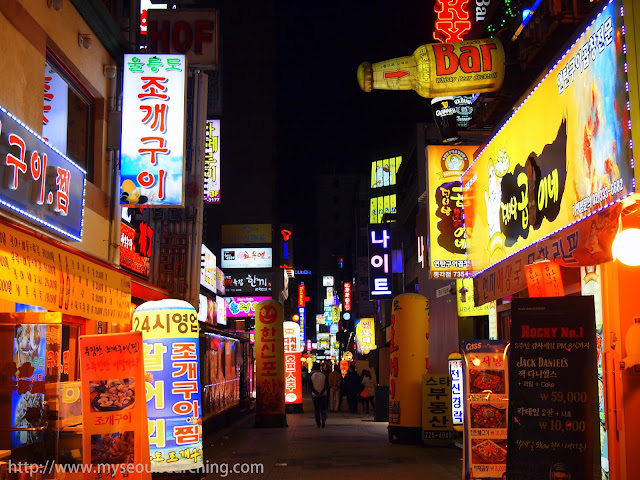 It’s not difficult to find a watering hole in Seoul, a city of neon.

Generally, a night out involves four cha but a big night out can take party-goers all the way into a fifth. Depending on who you ask, each round should be at a specific kind of place but after having hung out with a variety of Korean friends, I have my own ideas as to what each round includes and have come up with a cha system based on my personal experiences.

I recently had some friends visiting Seoul and when I asked them what they wanted to do and see in Korea, they didn’t have anything specific in mind but did want to try out karaoke with Koreans. I knew that I would have to show them much more than that and decided to take them out to Hongdae, Seoul’s youth and art district, for the ultimate Korean experience: a night of cha.

Although we actually did this a little out of order, the majority of Koreans usually begin their nights out at a barbeque restaurant. There’s something about Korean barbeque that encourages drinking.  Perhaps it’s the sight of the fatty slabs of samgyeopsal (pork belly) or the smell of burning charcoal.  Maybe it’s just the fact that BBQ and beer taste so damn good together. Either way, a few bottles of maekju and soju are ordered almost immediately upon sitting down. 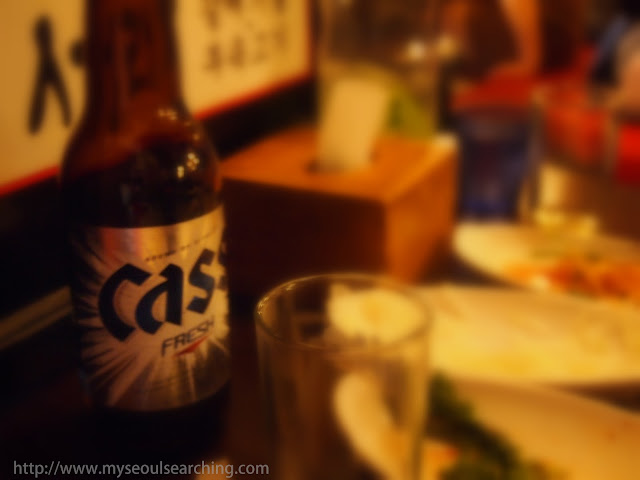 Meat and maekju… a match made in heaven.

There are quite a few drinking games that encourage taking shots of the Korean firewater from the iconic green bottles but I find that the best way to pace oneself is by mixing a bit of soju with some maekju to make “so-maek”, which is what we did while grilling a few platters of meat.  So-maek seems to make everything go down a bit smoother and makes walking to the next round somewhat easier. 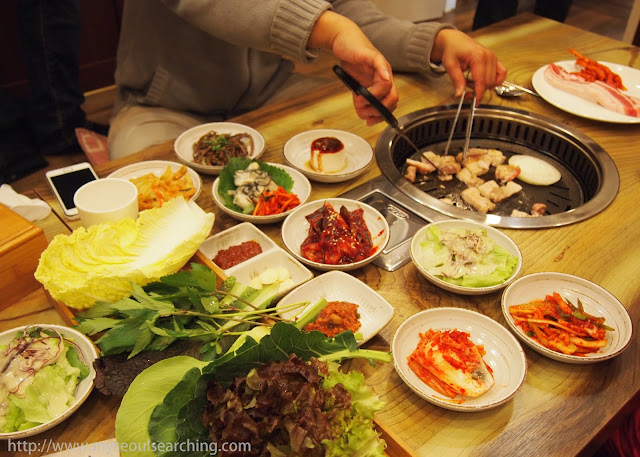 Korean barbeque is a good way to start out a night on the town.

Little did I know that when I was planning my friends’ night out that Santacon (think: huge crowds of drunken foreigners decked out in Santa gear) would be taking place on the same evening in the area.  Having done this before, I figured it would be something he would enjoy partaking in.

We picked up a few Santa hats at the dollar store and met up with the other Santas before heading to Ho Bar III. While the name may sound funny to some, Ho Bar is a popular chain of bars dotted throughout the city. Clientele is mostly twenty- and thirty- somethings and cocktails are cheap (starting at 3,500 won). There are pricier options that include bottle sets, a common find at most Korean bars.

Bottle sets can range from 100,000 ($100USD) to 600,000 ($600USD) depending on where the bar is located and often include a bottle of liquor, mixers and a platter of bar food or fruit. While it is a bit pricey, Koreans usually order these sets when in groups and the bill is typically picked up by one person, as “going dutch” is practically unheard of in traditional Korean culture.

After listening to some Christmas music, having a few drinks, and being entertained by the eclectic mix of Santas, it was time to head to the next place. 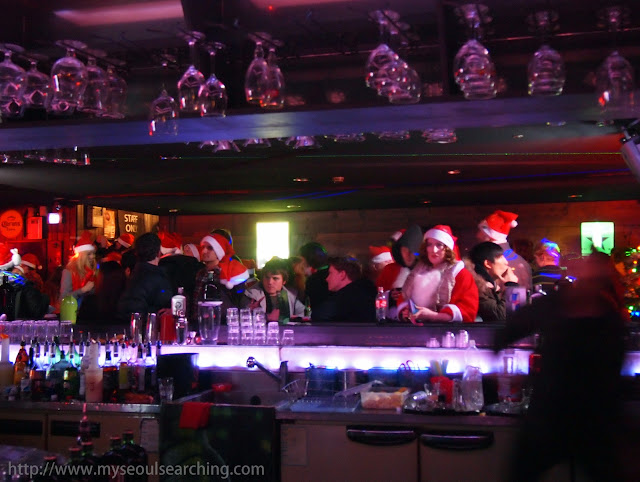 Sam-Cha (Round 3): Another Bar or Hof

Sam-cha is more or less the same as ee-cha, except at this point, everyone is boozed up. This is the point where folks let out their frustrations or problems with one another, as anything said while intoxicated is essentially “forgotten and forgiven” the next day.

Hofs are common hangouts for round three, as anju (drinking food) must be purchased with drinks. Said snacks are usually consumed with the intent of decreasing the chance of a morning hangover. Figuring we didn’t need this round, my friends and I went right into four.

When partying in a youth district like Hongdae, round four typically involves dancing. There are plenty of big, flashy clubs throughout Seoul but there are also some cool underground places that are pretty chill but allow for dancing and mingling if its desired.

I took my friends to Obeg (“500”) Club which is literally underground and has the atmosphere of a Middle Eastern desert. Patrons sit at tables in caves or dance to indie electronica (if there is such a genre). Fortunately for the night owls, most clubs and bars such as these stay open until the wee hours of the morning, or at least until the first subway trains start running. 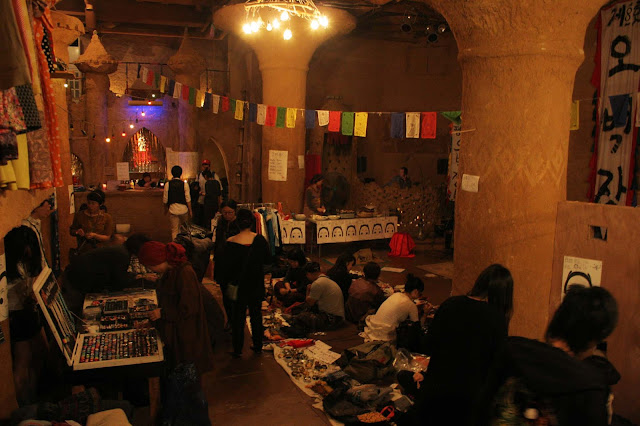 Obec, or 500, is a cool place to enjoy strong cocktails and good music in a unique atmosphere.  (Photo: Oh SoKo)

Karaoke is a national pastime of Korea and it would be a sin to skip out on this experience while visiting or living on the peninsula. Karaoke isn’t something that is done in large groups of people here; instead, noraebangs are businesses of individual rooms, allowing private parties to sing their hearts out without fear of being judged by complete strangers. 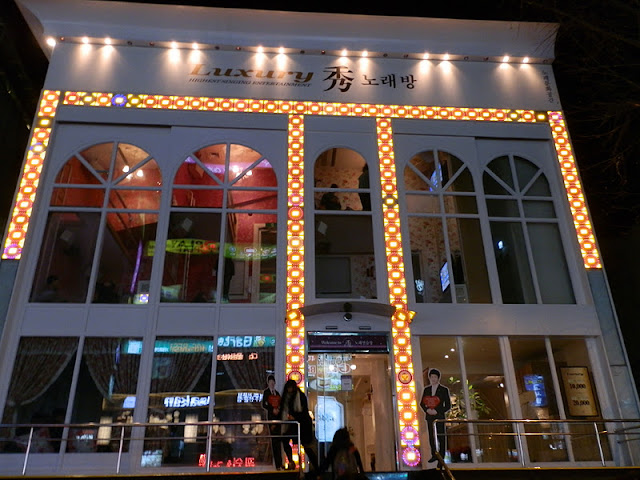 The facade of Luxury Noraebang in Hongdae.  Passerby usually stop to see what sorts of shenanigans are going on inside. (Photo: WhosTheFOBNow)
For the most part, noraebangs are extremely tacky with their neon flashing lights and cheesy decor, but it all seems to work. I was excited to bring my friends to Luxury Noraebang, one of Seoul’s most famous singing rooms, easily recognizable by its glass facade. We waited to get one of the rooms with a window so we could have a good view of Parking Street, the main strip of Hongdae. We drank a few beers, shook tambourines and sang (or tried to at least) a very random mix of songs, including the finale: “Gangnam Style.” 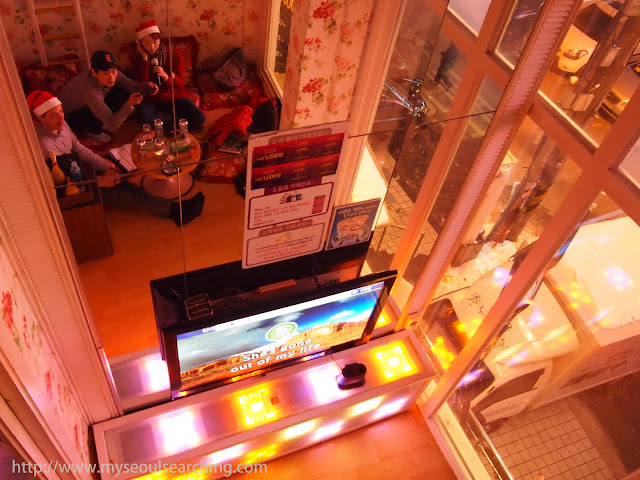 The ten minute wait was well worth our pimped out room with a view of Parking Street.

By the end of o-cha, most are exhausted and head home (or to the nearest sidewalk) for a few hours of sleep before making it to class or work the next morning. We did the same, waking up somewhat early and feeling pretty good to get out and do some sightseeing despite the exhaustion. Still, I will never understand how Koreans work so hard and play so hard at the same time. Hangover drinks? Secret naps at work? I just can’t figure it out.

As time and Korea progresses, however, many companies are working to stamp out the excessive drinking culture. Employees are beginning to take a stand and some have even gone so far as to sue their employers for being forced to drink. This is definitely a good thing in my book, and it’s great to know that measures are being taken to combat binge drinking in the corporate environment. But, something tells me that the cha tradition – BBQ, soju games, karaoke, and all – is here to stay. Only time will tell, but in the meantime, I’ll keep on cha, cha, chaing.