By Mimsie Ladner on Wednesday, October 16, 2013
The excitement is palpable, as it always is just before any dance competition.  Upbeat Latin tunes echo through a hall of dressing rooms that buzz with giddy conversations in a number of languages. Inside, flamboyantly dressed men ensure that every tassel of their costumes is in place while their female partners apply thick eyeliner and bright lipstick.  Nearby, nervous teams rehearse choreographed moves a final time before the show begins.

It is a scene one might expect to see in Bogota, Havana, or even New York City.  But this is Seoul, South Korea, an unexpected locale for a salsa competition.  Yet, Latin dance fever has taken over one of Asia’s biggest cities and this year’s Asia Latin Music & Salsa Festival proves it.

Dancers from all corners of the globe have flocked to Seoul to compete for the $11,000 first prize and refuse to return to their home countries without bringing their best to the stage. 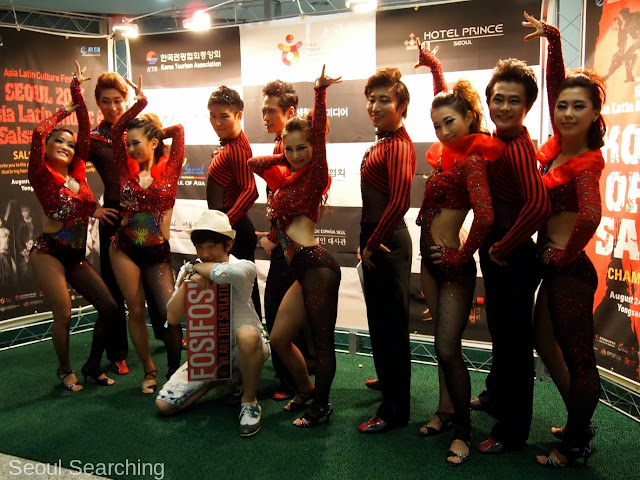 Jeio and Teresa Chung are among the contestants and have the reputation of being two of Korea’s best dancers, having represented their country in a number of salsa congresses throughout the world.  The duo has been dancing as partners for about a decade now and has since been active in promoting the dance scene throughout the peninsula to make it what it is today.

But sensual dancing, particularly of Latin origin, hasn’t always been so accepted in conservative, Confucian Korea.

In the 1990s, it was considered lewd for women to participate in social dancing in the slowly growing number of underground salsa clubs, as the environment created an atmosphere conducive to cheating and the sexuality of the dancing style was a catalyst for extramarital affairs, or so it was believed.  However, as popular TV dramas and other media sources began to popularize the dancing, it became less taboo to engage in the hobby.

It didn’t take long for salsa clubs and dance schools to spread from Hongdae, Seoul’s grungy youth district, to the upscale neighborhoods of Gangnam and on to the southern coastal city of Busan. Today, Korea is reputed for having the best social dancing scene on the continent, not to mention some of the most dedicated and hard-working salseros and salseras in the world. 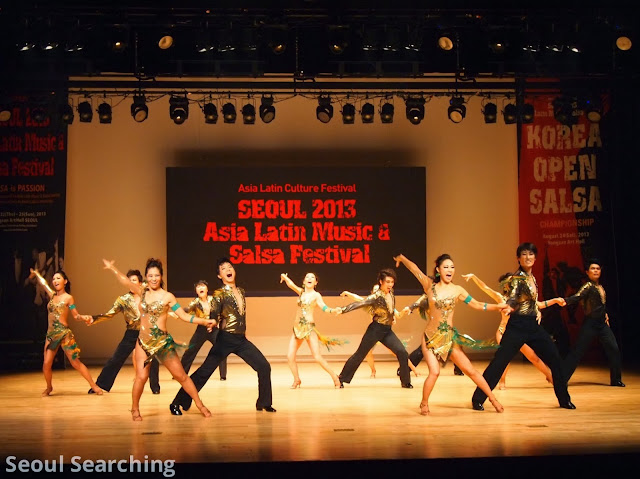 Internationally renowned Australian salsa champion and Dancing With the Stars (Australia) coach Alex Bryan agrees.  “Korean dancers are very dedicated.  They take on the craft, they take it very seriously, and they absorb as much as they can,” Bryan remarks, adding that he is also impressed by their stage presentation.  “They’re more over the top here than anywhere in the world.  I have been to almost every world championship and I have never seen anyone bring it to this level.”

As the Asia Latin Music & Salsa Festival begins, a passionate roar from the audience rolls through the auditorium and continues on throughout the evening as contestants twirl, flip, and defy gravity in unison with the beats of music imported from the opposite side of the globe.  Students of some of the city’s best salsa schools go wild when Jeio and Teresa walk on stage and give a showstopping performance.  Although their moves are undoubtedly Latin American, it’s obvious that there’s something slightly different about their performance.  Something characteristically Korean.

Jack Dunn, one of the competition’s judges representing the China Salsa Congress, notes the difference. “Koreans have developed their own flavor for the way they dance salsa.”  He continues, “But it doesn’t matter which country you’re from because basically, there are the core salsa steps, but as far as performing and competing, it’s all about personality.” 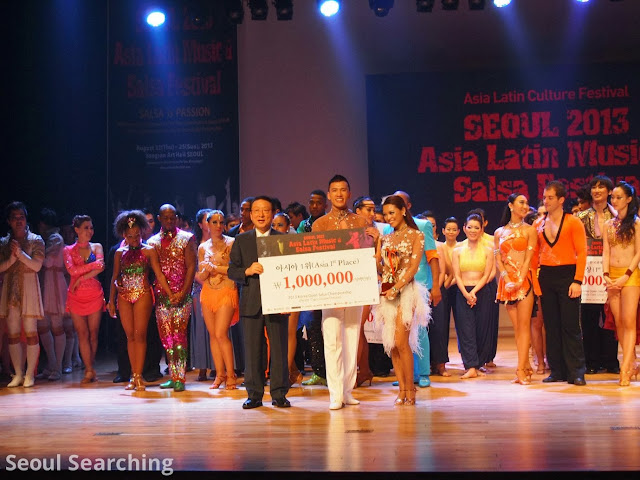 Soon, it is time for the winners to be announced.  Although Jeio and Teresa do not take home the grand prize, they are awarded 1st place in the Asia division.  Just as it seems the congress has concluded, something fantastic happens.  Every performer on stage begins to dance together, regardless of their country of origin or language or salsa school association.  The audience is quick to stand up and join in.  As it turns out, no one is here for the money, after all.   They’re in Seoul for one reason and one reason only: to dance salsa.

Words and photos by Mimsie Ladner of Seoul Searching.  Content may not be republished unless authorized.