By Mimsie Ladner on Thursday, April 14, 2011
As a kid, I was probably one of the pickiest around. If it wasn’t pasta, pizza, or cheese, it wasn’t going on my dinner plate. There were a few exceptions like olives and artichokes and spinach. Come to think of it, I was probably Italian in a past life.   I was so picky, in fact, that I had never even tried broccoli until I was in college. But, at some point in the past 5 years, I started trying new foods… and liked them. I then realized that I had been missing out on so many incredible foods that I vowed never to pass on a dish without trying it first.

Since I moved to Korea, I have regretted taking that vow on a few occasions.  At the same time, however, I’ve found that there are very few foods that I actually dislike and my gastronomic experiences have since covered a wide range of culinary treats, including some stranger ones that are characteristically Korean. Below are the strangest foods I’ve encountered here, but I must warn you, the reader: these dishes aren’t for the faint of stomach.

Odeng (오뎅): Or, simply put, fish cake. The first time I tried this common Korean food (which is actually Japanese) was during a school lunch. They came in a soup and I mistook them for some sort of bread. I wasn’t particularly fond of the texture, but I didn’t think the taste was so bad. Later on, I found out that it was actually fish cake.

As it turns out, the fish are scrambled- yes, like eggs- and kneaded together to make certain shapes. The odeng can be formed into small slices to add to tteokbokki (spicy rice cakes), or longer strips to be put on sticks and sold on the streets. (For less than $1USD, at that!) Yet, I find that the strangest way fish cake is served is in udong (noodle soup) in the form of a small oval and decorated with colorful pictures of cherries. Like I said, it doesn’t taste so bad, but scrambled, colorfully designed fish is just strange. 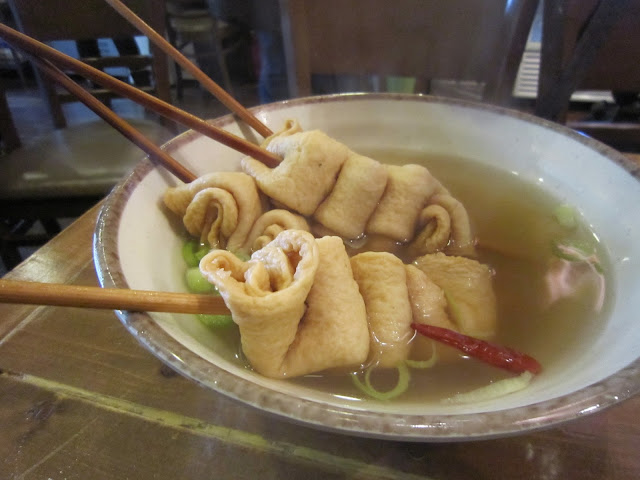 Odeng is one of the most popular street foods in Korea. (Photo: www.thetravelliz.com)

Beondegi (번데기): If the thought of roasted silkworm larvae doesn’t turn you off, then the smell will. I’ve acclimatized fairly well to the smells of Seoul, but the stench of these little creatures is impossible to get used to. The dish is another common street food, mostly eaten as a snack and often popular amongst children. I’m guessing that most of these kids don’t realize that they are eating bugs, as a fear of insects is widespread across younger generations.

Anyway, beondegi are often smelled before seen but when I do happen to see a vendor, I hold my breath until I’ve passed. A few years ago, my cousin and her boyfriend at the time came to visit me in Seoul. He lived in Korea as a young boy and wanting a taste of his childhood, he naturally went to the bugs. He handled it well, but when he offered it to me, I couldn’t help but gag. The beondegi tasted like it smelled: a roasty, chewy, putrid, insecty fusion that left one hell of an aftertaste. These little guys are also sold canned, stewed in a nasty juice, and are available at Asian markets in the Western World, just in case you’re feeling adventurous. 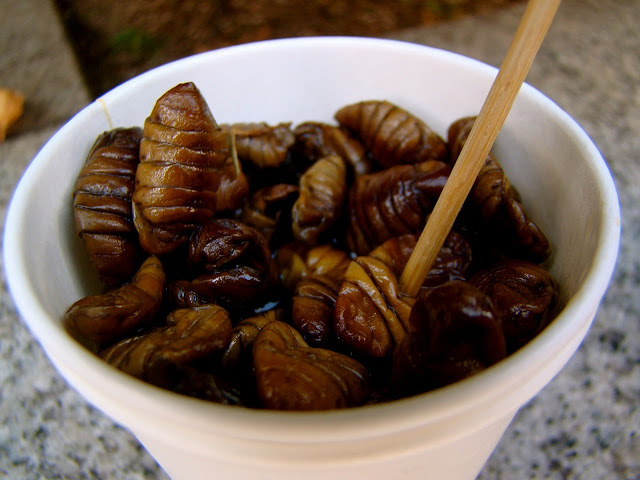 Despite their appearance, foul smell, and rather rancid taste, beondaegi are a popular street food in Korea. (Image: TheAsianPersuasion.org)

Dalk-ddong-jib: This little treat translates literally to “Chicken’s House of Poo” which, in essence, is chicken anus, a favorite drinking food amongst Korean businessmen. Dalk-ddong-jib is usually steamed or stir fried and is made with a seemingly harmless mix of oil, chilies, and sesame seeds. I was a bit apprehensive to try it, but did so out of politeness when with a group of locals. It was a bit chewy at first, but the flavor was good and I ate until I was full. Then again, I guess anything is good when accompanied by soju. It wasn’t necessarily a dish I’d find myself craving, but of the stranger foods, it was one of my favorites. 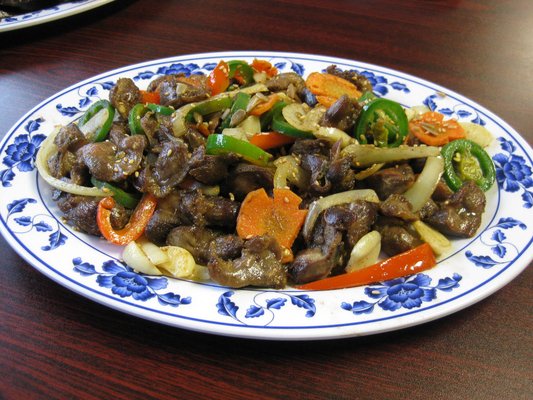 Stir fried chicken anus is more appetizing than one might imagine. (Image: Yelp)
Seonji Haejangguk: Coagulated ox blood hangover soup. I know your mouth is watering already. I was on a trip in the Korean countryside in the middle of winter.  My pension was quite literally in the middle of nowhere, so after having walked in freezing temperatures to find a restaurant, I was extremely excited to see a restaurant and was eager to eat something hot.  My Korean companion insisted on ordering a special soup, something that would definitely warm us up.

I cringed on the inside when the waitress set the ox blood soup on our table. There, in a bowl of salty water sat something that resembled a moldy, gray sponge. Damn that food vow of trying everything. One spoonful was all it took for me to realize I wasn’t a fan; the slimy texture ruined it for me.  Most Koreans, however, love this stuff; it is the go-to after a long night of drinking, as many swear by its hangover-curing properties. Thanks, but I’ll stick to Tylenol and water. 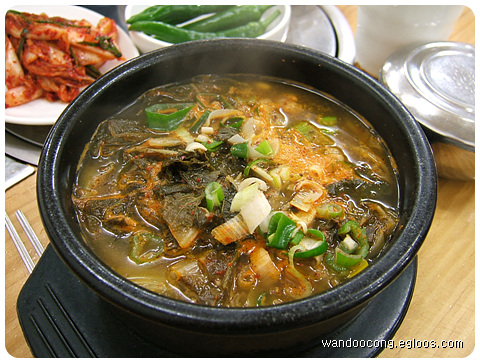 The nastier the dish, the more medicinal properties it’s claimed to have. Cow’s blood soup is considered a go-to hangover cure amongst Koreans.

Sannakji:  A quintessentially Korean food, and a must try for all visitors to the country, live octopus is as fun as it is tasty. I’ve actually seen people pull small octopi out the ocean and in primal fashion, bite their heads right off, but I figured I’d stick to the more traditional methods for my first try.

Sannakji is usually cut into small pieces and topped with a variety of greens and sesame seeds, with a couple of spicy sauces on the side for dipping. When I tried it, the thing was still very much alive and it danced wildly on my plate while I attempted to pull a bit of the tentacle off with chopsticks. The little guy- or part of him- wasn’t going to give up easily and sucked and sucked to stick to the plate until I finally was able to pry him off, dip him in some sauce, and chew away. Chewing is the most important part of dining on live octopus, as there have been cases (approximately 6 a year) in which the octopus has used its suction cups to grab on to the eater’s esophagus, thus choking him or her to death. Who would have thought that octopi could make their way to the top of the food chain? 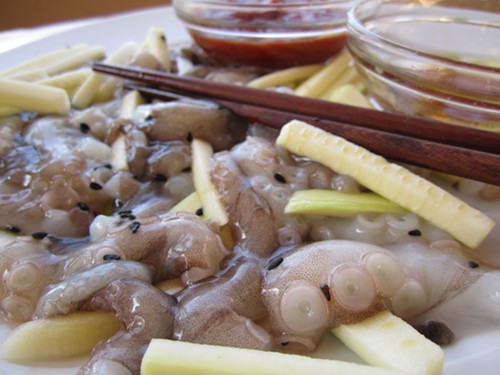 Now, for the biggie. I wouldn’t recommend either die-hard animal lovers or any active member of PETA to keep reading. Really.

Boshintang (보신탕): Dog soup. Yeah, I did it. I ate dog. It was something that was on my Korean bucket list, despite the serious Western taboo associated with it. I really try to live as the locals do when traveling and I didn’t let the strangeness of the dish keep me from doing so. So, when I told my former supervisor that I wanted to try it, he gathered a few of us together one day for lunch- it’s cheaper compared to dinner- to sample the local delicacy. I felt really strange walking into a dog restaurant, but I wasn’t going to back out. 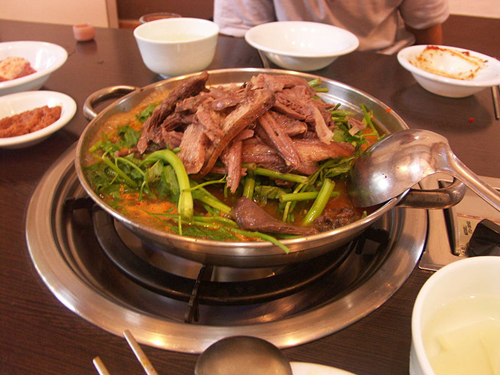 Sorry, PETA. (Photo: mfraiman.wordpress.com)
First on the menu was dog meat. It came out much like other animal meats do in Korea- sliced into medium sized chunks. I took my first bite with eyes closed, figuring that might help the whole psychological uneasiness of the situation. Soon enough, I found out that the dog meat was…. well, delicious and as tender as a perfect pot roast. I guess meat is meat is meat. The soup, on the other hand, wasn’t as enjoyable and was much too gritty for my taste. It was almost as if there was a blender… no, I’ll stop there.

Boshintang is not something I’ll be eating again, but dog is considered a delicacy here and it’s quite expensive. It’s most often consumed by older men, as it has a reputation for enhancing stamina but most younger people (my generation and under) are absolutely appalled by the idea of eating dog. It’s quite common to see animal rights organizations out and about, protesting dog farming, and if my guess is correct, the whole practice of eating dog will be outlawed within the next decade or so.

I’m a firm believer that one cannot experience a country’s culture until he or she has eaten the food, no matter how unusual it may be. Korea is no different. While not all of these more bizarre foods have been exactly what I would consider delicious, I have enjoyed trying them; despite their tastes, I’ve cherished the experiences associated with them. If only I could muster the courage to try that peanut buttered squid stuff they sell in the movie theaters, or the dead body soup (named for it’s smell, not it’s ingredients) then I’d really be able to consider myself adventurous.