By Mimsie Ladner on Sunday, August 5, 2012
Temperatures have reached upwards of 36 degrees (that’s 96 for you Americans) here in Seoul and many people are saying that this is the hottest summer they can remember in Korea. The heat and humidity have made the days quite miserable lately, forcing Seoulites indoors as the parasols and fans just won’t cut it.

I’m right there with them, especially since my old air conditioner doesn’t do anything and I’m convinced that it’s actually hotter in my room than it is outside. Despite the unpleasantness of it all, there are some seasonal Korean eats and treats that help to make the heat a bit more tolerable.

Cold noodles are a favorite of Koreans on hot summer days. Mul Naengmyeon (“water noodles”) is a dish that consists of chewy buckwheat noodles topped with a few shreds of vegetables (usually cucumbers) and half a boiled egg and is served in cold, icy clear broth.

To me, it tastes best with a dollop of gochujang (spicy red pepper paste) and a squeeze of vinegar and mustard. It is usually eaten with barbequed meat which is a nice addition, as the charcoal flavor is a taste of summer in itself.

Try it at Bukchon Mandu in Insadong. 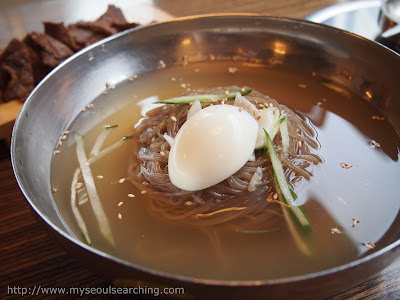 Mul naengmyeon is the perfect meal for cooling down.

Another summer favorite is kong guksu (“bean noodles”) which is also a cold noodle dish but is quite different from mul naegmyeon. The noodles in this dish are hand cut and made from wheat flour, making them thicker and softer. They are served in a creamy broth made from ground soybeans and salt is usually added to taste.

This soup can be a bit gritty and it took me a while to get used to it but after acquiring a taste for it, I’ve become quite addicted. It tastes especially nice with a side of fresh kimchi.

Try it at Jinju Hoegwan near City Hall. 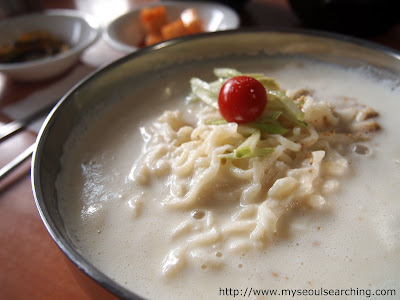 Kong guksu is light and icy… great for summer!

Samgyetang (삼계탕)
Koreans have a theory that during the three hottest days of summer- chobok, jungbok, and malbok- heat should be fought with heat. So, it’s tradition here to eat samgyetang (ginseng chicken soup). The soup contains other healthy ingredients like garlic and jujube, which no doubt helped to fight the illnesses prevalent during the heat back in the day.

I’m all about following tradition, and the soup is quite delicious, but I prefer to eat my samgyetang in restaurants that have the AC on full blast.

Try it at Tosokchon Samgyetang near Gwanghwamun Station. 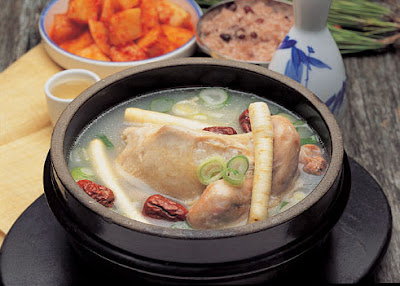 Samgyetang is eaten on the hottest days of summer. (Photo: Korea Tourism Organization)

Patbingsu (“red bean ice flakes”) is essentially the closest thing to a Korean snowball. Traditionally, the summer treat is a mound of ice shavings topped with sweetened red beans and rice cake pieces. Nowadays, the treat can consist of just about anything, as coffee shops and restaurants (from Korean joints to Burger King and Baskin-Robbins) try to outdo each other on creativity.

I don’t mind the red beans but my favorite bigsus are usually full of condensed milk and loaded with ice cream and lots of fruit in place of the beans. The green tea versions are also quite delectable. Try it at Homilpat (호밀밭) in Sinchon! 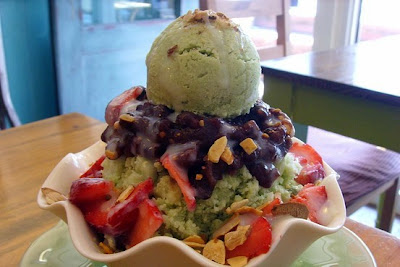 Patbingsu is as cold as it is sweet… and unique.

Maekju (맥주)I’m pretty certain that maekju, or beer, is a beverage enjoyed by the entire world during the hot days of summer. Korean beer isn’t necessarily world renowned and I have to admit that neither Cass, Max, or Hite, the top Korean brands, are on my list of favorite beers. Still, Koreans have a cool tradition that make drinking the subpar brews enjoyable.

When the days become warmer in May, convenience stores around the country break out their plastic patio furniture so that customers don’t have to go far to have a beer. Considering domestic beer is quite cheap, convenience store drinking sessions offer a budget friendly, more laid back option compared to bar hopping.

It’s quite the norm for my co-workers and I to get together after a long day at work at the nearby Family Mart and throw back a few brews over some ramen noodles or snacks. The plastic tables usually stay out until the weather turns too cold to be outside.

TimeOut recently compiled a list of the best convenience stores to sip beer. Check it out here. 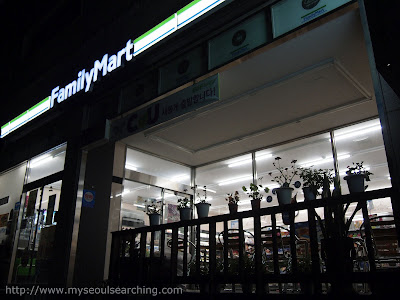 Some convenience stores, like this Family Mart near my apartment, even have patios, creating a comfortable atmosphere for corner store drinking sessions.

In addition to these more traditional foods, lemonade stands, ice cream vendors, and bubble tea shops are popping up all over Seoul and becoming the culinary trends of the season. Still, it’s certain that the classics mentioned above will never go out of style during the hot Korean summers. 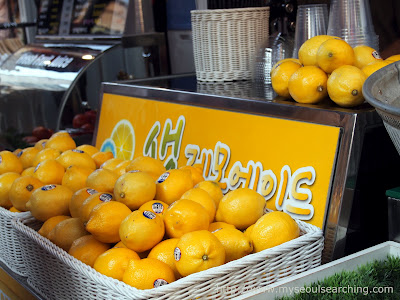 Lemonade stands are all the rage this summer in Seoul.