By Mimsie Ladner on Friday, August 29, 2014
Korean cuisine, much like the country’s people, is vibrant, flavorful, eclectic and packs a lot of punch. It’s so diverse that it would take years to try each banchan (side dish), variety of kimchi (there’s over 200!) and regional and seasonal specialty. Fortunately for gastronomes eager to sample Korea’s tastiest cuisine in a limited amount of time, O’ngo Food Communications offers a number of food tours that take all the guesswork out of the search for the country’s best restaurants.
This week, I joined O’ngo on their highly popular Korean Night Dining Tour, an activity that consistently ranks in the top 5 list of things to do in Seoul on TripAdvisor.  After meeting my tour mates- a diverse group of friendly Singaporeans, Germans and Australians- and our enthusiastic local guide Gemma, we hit the streets of Jongno with our mouths watering and our bellies growling.
From the get go, Gemma gave us fun tidbits about the landmarks we passed and the streets we wandered, including Galmaegisal-gil, the first stop on our tour. This street, a cramped alley of tiny restaurants, smoking grills and boisterous businessmen perched on plastic chairs downing soju, was incredibly picturesque and captured the true essence of the city. 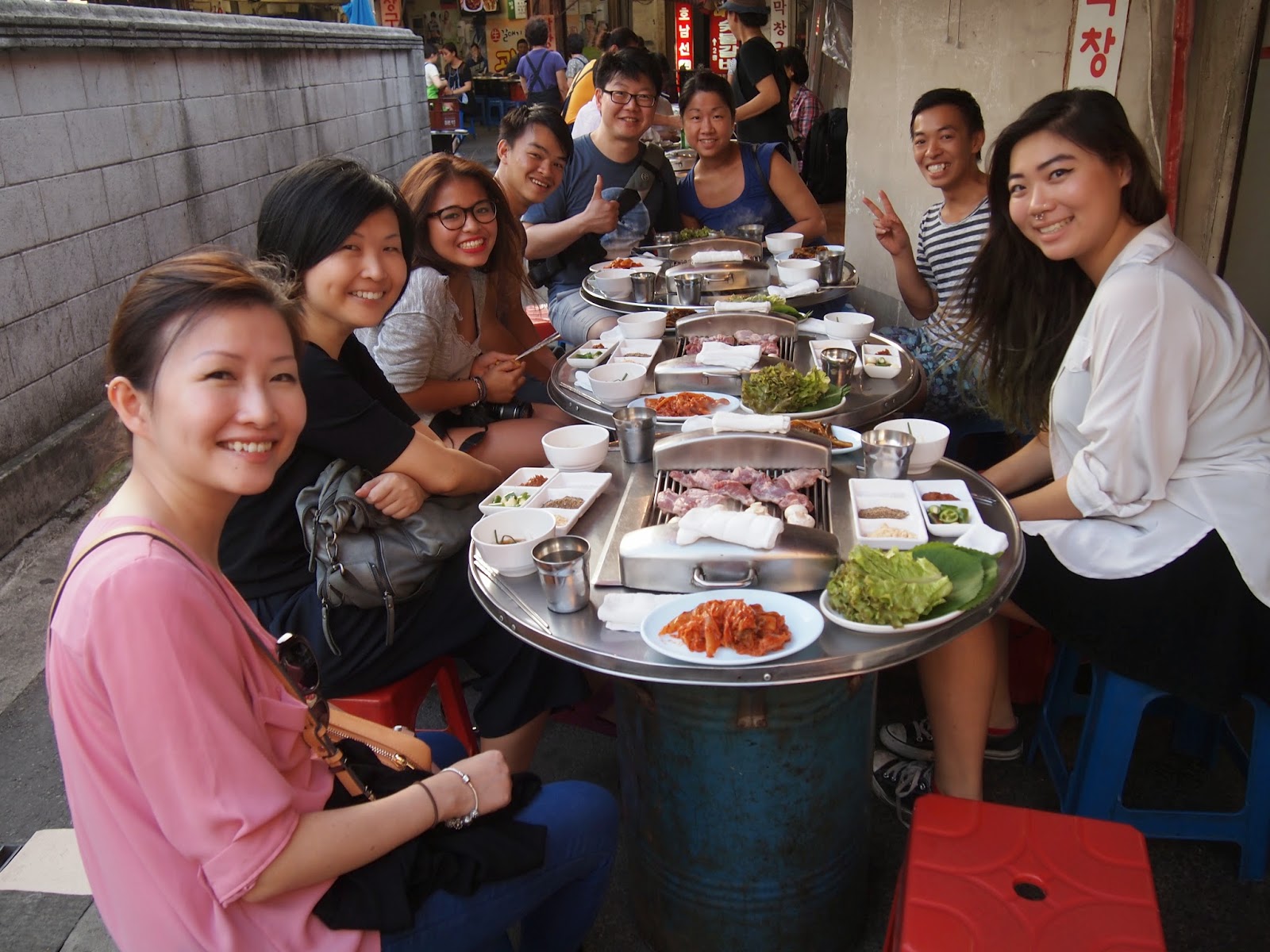 We took our seats at an unassuming corner restaurant, the first in the city to serve galmaegisal, pork skirt steak. The table had already been prepared for our group, and the servers were kind enough to do the cooking for us, a big plus for foreigners less versed in the art of table grilling. Gemma explained how to wrap the perfectly cooked pork in mustard greens and sesame leaves, adding just the right amount of mung bean and sesame powders, salt, and ssamjang (dipping sauce), all the while devouring it in one bite. 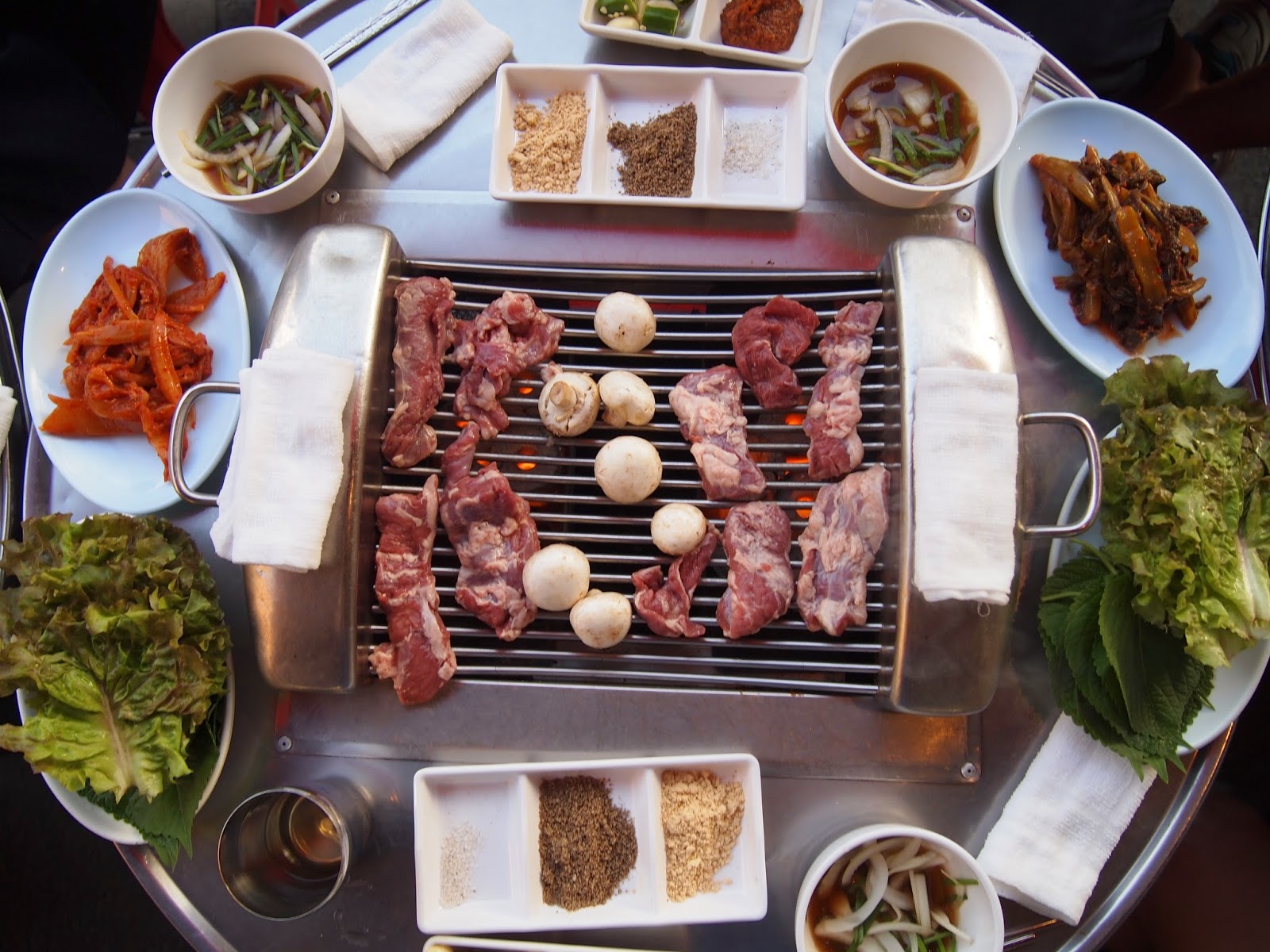 Suddenly, the entire table was quiet as we stuffed our mouths with the deliciousness that is ssam (lettuce wraps). But, the silence wouldn’t last long, as Gemma didn’t waste any time in serving us cojinganmek, a “bomb” shot of Coca-Cola, soju, and beer. We were all a bit flushed and full by the end of the meal, but it was soon off to the next stop. 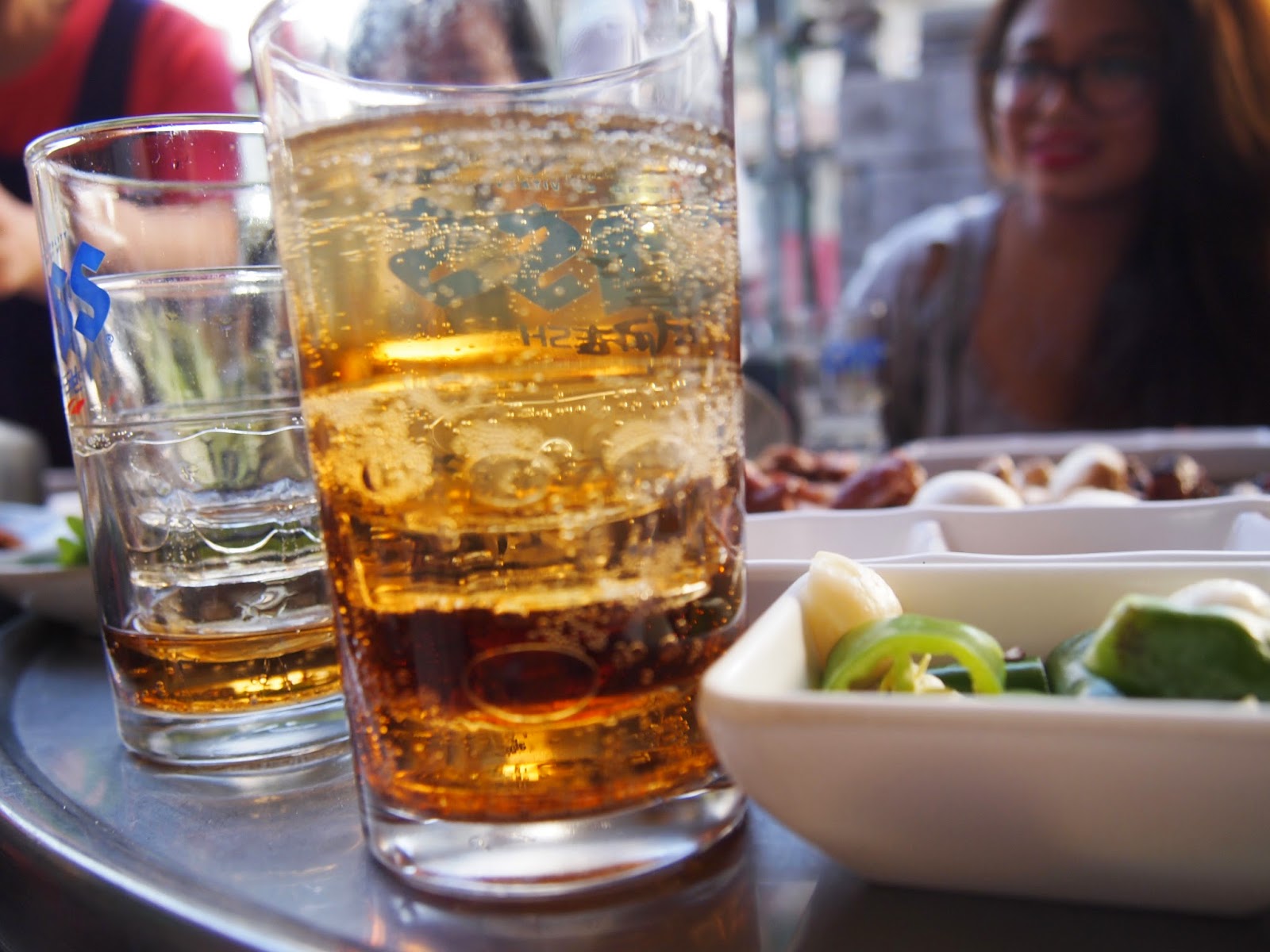 Weaving through Insadong’s alleys, we found ourselves at a hidden tteokbokki joint. The rice cake snack we sampled was a twist on the original, and rather than being spicy, was sweet and soupy, and was mixed in with carrots and fish cakes in a soy-based broth. Although I still prefer the original, it was nice to try something new. We slurped up the tasty dish, and washed it down with few shots of maehwasu, Korean plum liquor. 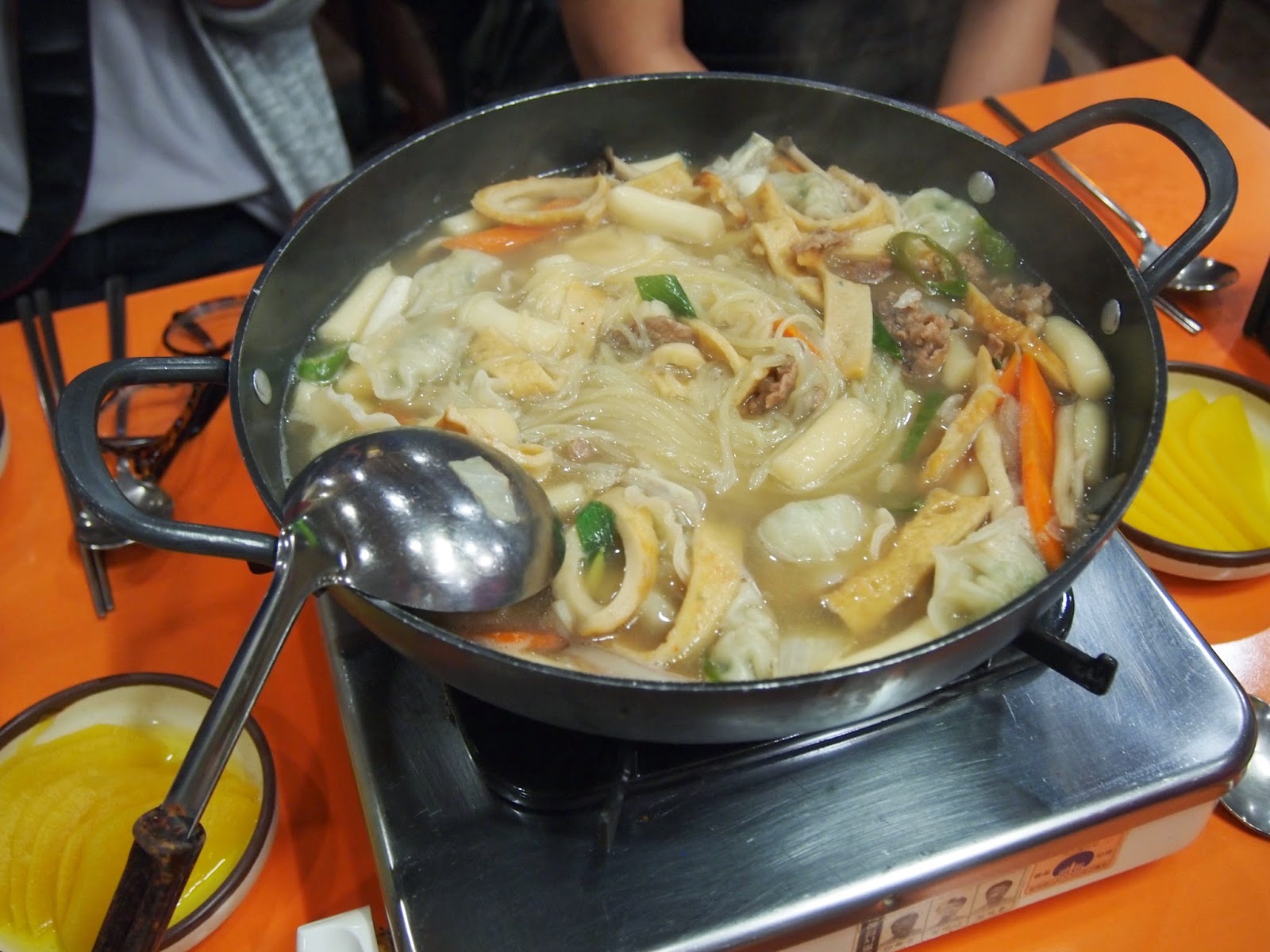 We managed not to stumble to our next destination, a pojangmacha, or tent bar. Gemma explained to us that these quintessentially Korean drinking establishments are expected to be extinct within the next ten years, as the government has been doing away with them, firmly believing their existence tarnishes Korea’s image as a clean and forward-moving society. (They’ve yet to understand the fact that they’re one of the favorite places of foreign tourists and residents to experience the country’s culture.) 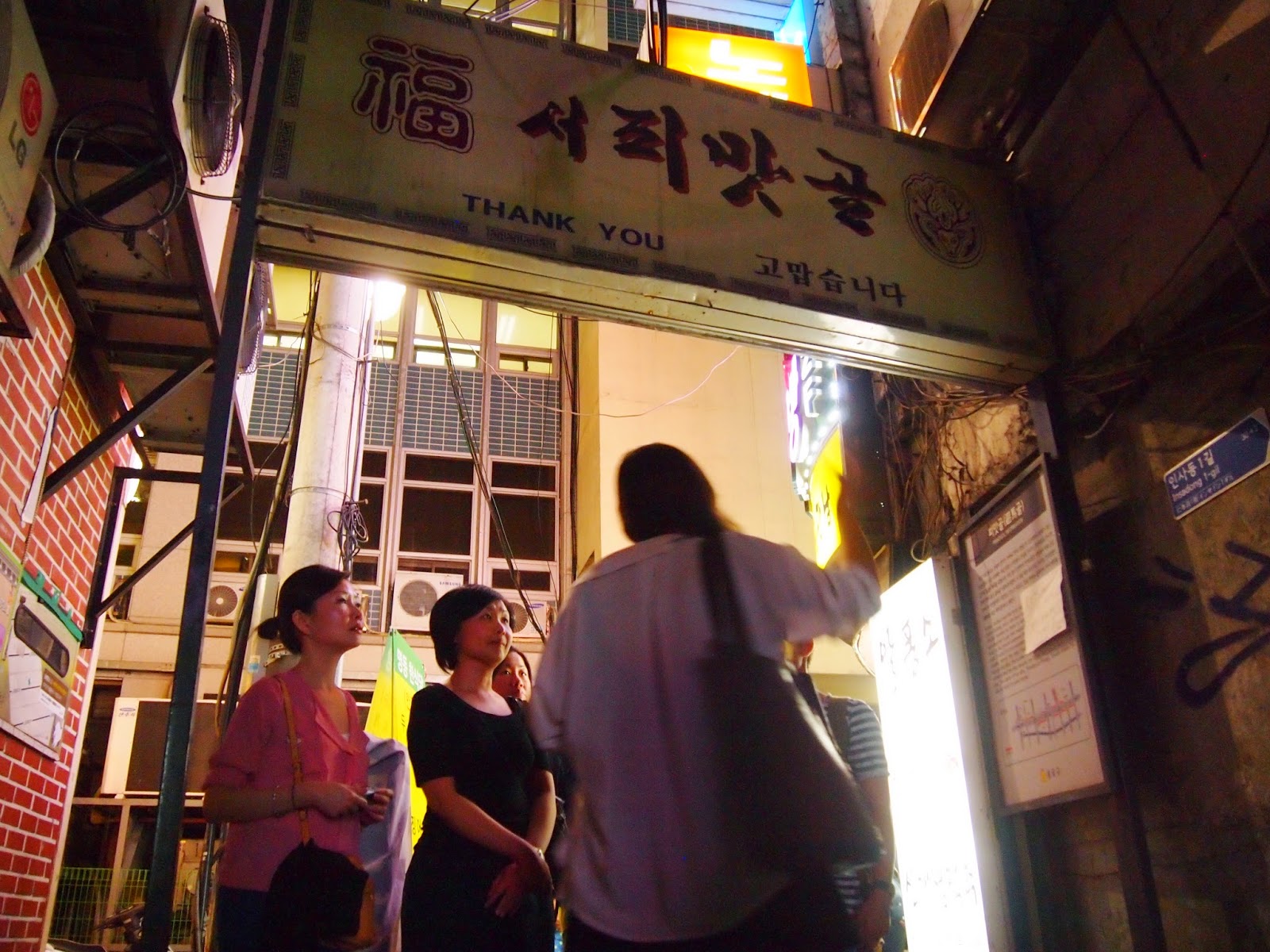 We may have looked a bit out of place to the elderly gentlemen that surrounded us, but we were welcomed with smiles and hospitality. Despite the warm summer weather, the generous portions of dakbokkeumtang, or spicy braised chicken stew, hit the spot and was the perfect companion for the somaek (beer and soju cocktail) that Gemma so impressively whipped up for us. By this point, we had all bonded, not necessarily because of the alcohol, and were having a great time exchanging funny travel stories and telling jokes. 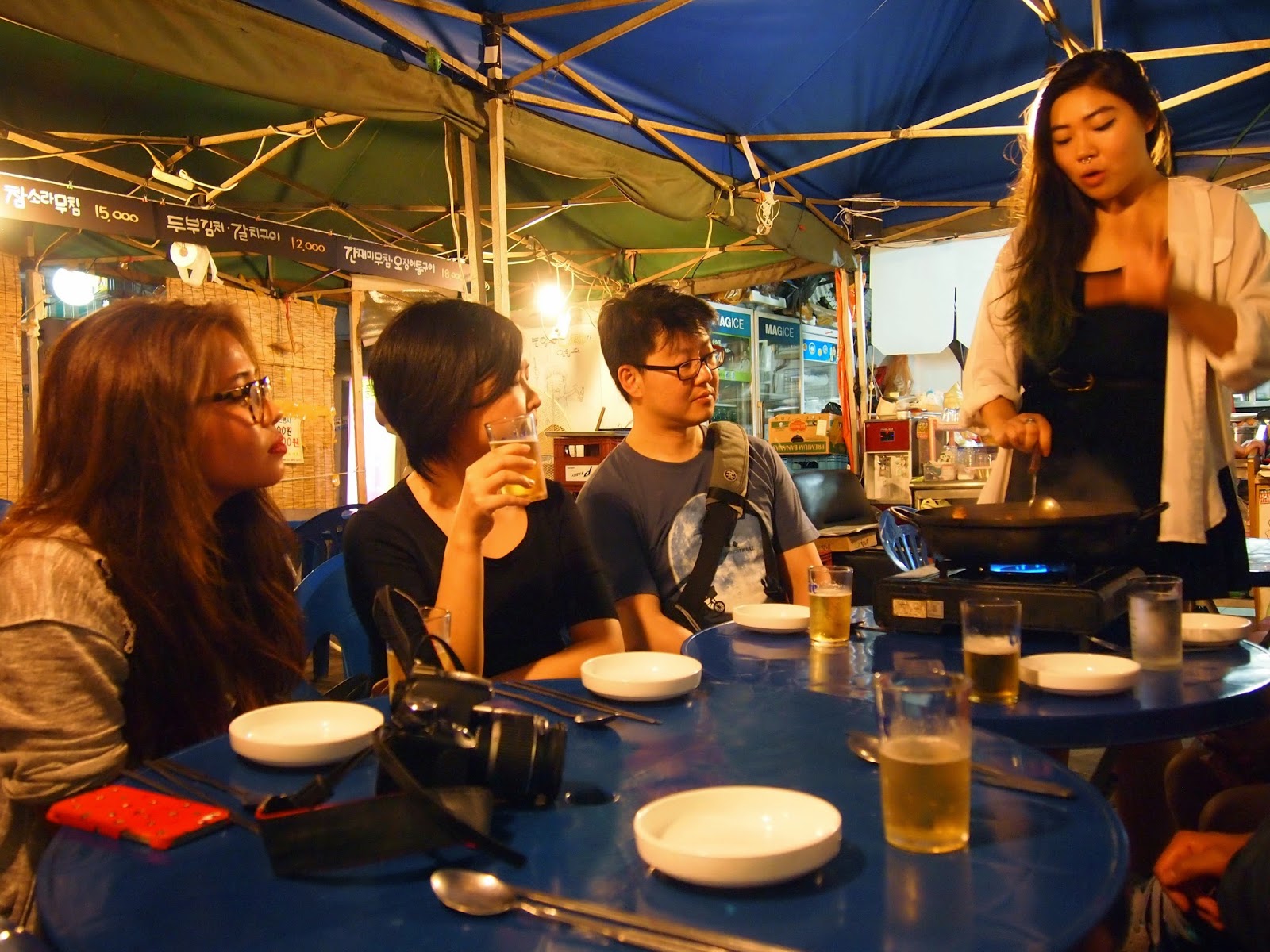 It didn’t take long to reach Gwangjang Market, one of Seoul’s oldest and most famous traditional markets, particularly popular for its food. The market was packed and scents of fermenting seafood, fried goodies and spilled alcohol permeated throughout. We were led to a three-story restaurant and were quickly served up plates of bindaekduk (crispy savory pancakes) and mixed jeon (fried veggies, meat and seafood). By this point, I wished I had worn elastic pants but still managed to shovel down a few bites. Gemma poured us bowls of makgeolli (Korean rice beer) and taught us a few basic drinking games. We couldn’t stop laughing at our ineptitude to play, yet were still probably the tamest group in the entire place. 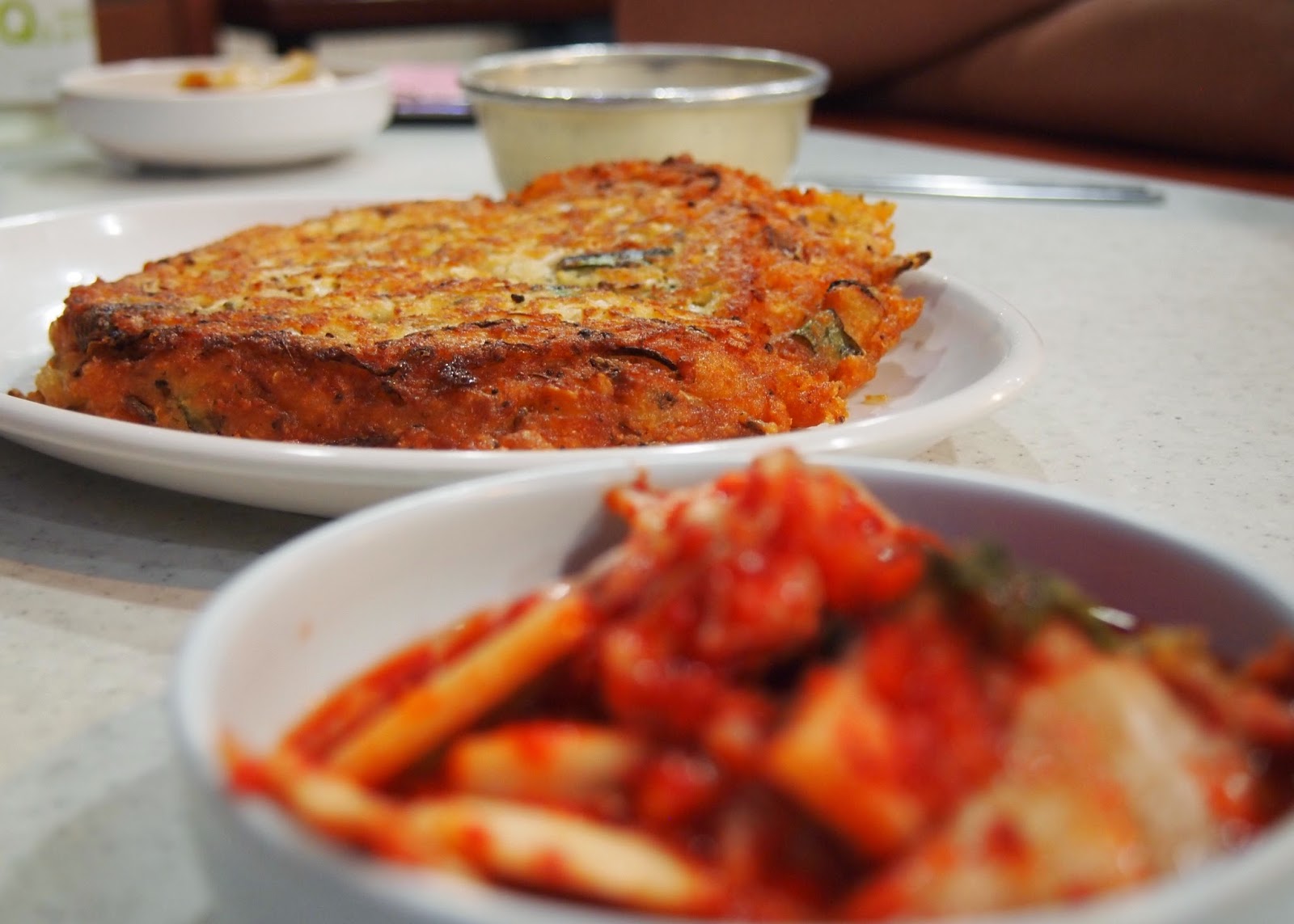 After a night of drinking games, wandering Seoul’s streets, meeting new friends and gorging on the city’s tastiest treats, we parted ways. Half of the group headed out to Dongdaemun for some late-night shopping while the rest of us, practically in food comas, went home.
Overall, I was extremely impressed with O’ngo’s Korean Night Dining Tour. Even after living in Seoul for five years, I was introduced to neighborhoods I had never visited and dishes I had never tried. The guide was fun and helpful, the tour well-structured and organized, and the price excellent for the value. It’s the perfect tour for those wanting to make the most of a short trip in Seoul, but is also fun for long-term expats like myself looking to learn more about the hidden gastronomic gems of the city. 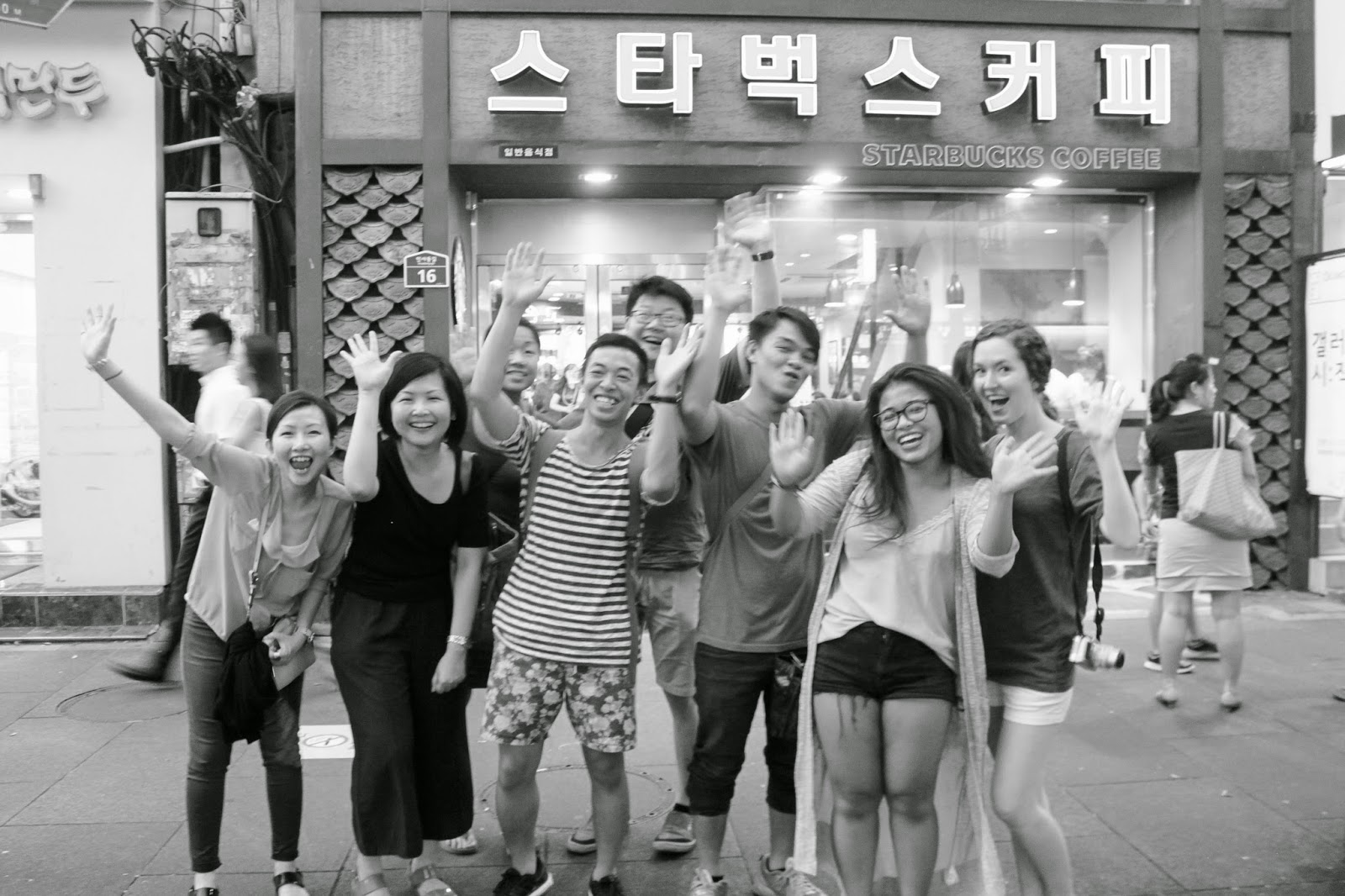 Photo courtesy of Chang Thuy.
More Information
The Korean Night Dining Tour runs daily at 6PM and is three and a half hours long. The tour begins at the O’ngo Culinary School, located just a few minutes’ walk from Insadong. The cost is $88 USD per person and there are discounted rates for those not drinking alcohol, kids, and groups of eight or more. For more information about O’ngo or to make a reservation for this food tour, click here and fill out the form.
*Although this post is sponsored by O’ngo Food Communications, the opinions are, of course, my own.
Words and photos by Mimsie Ladner of Seoul Searching unless otherwise noted. Content may not be reproduced unless authorized.